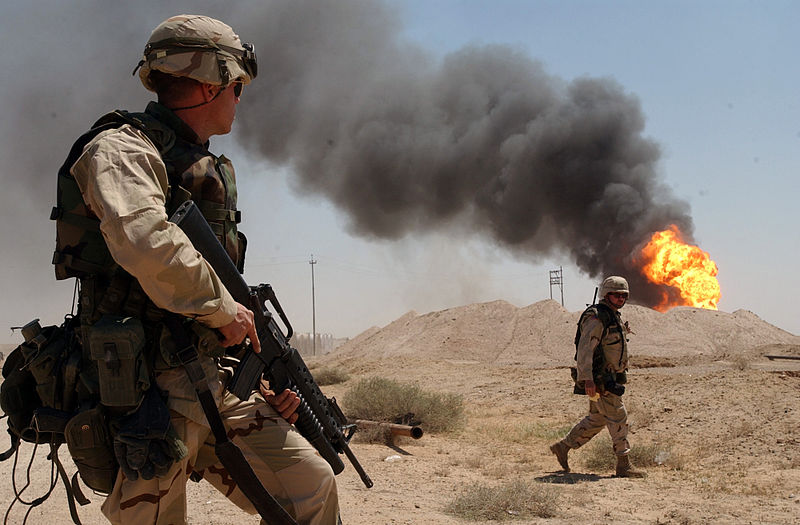 When the United States, the United Kingdom, and the “coalition of the willing” attacked Iraq in March 2003, millions protested around the world. But the war of “shock and awe” was just the beginning. The subsequent occupation of Iraq by the U.S.-led Coalition Provisional Authority bankrupted the country and left its infrastructure in shambles.

It’s not just a question of security. Although the breathtaking violence that attended Iraq’s descent into sectarian nightmare has been well documented in many retrospectives on the 10-year-old war, what’s often overlooked is that by far more mundane standards, the United States did a spectacularly poor job of governing Iraq.

It’s not that Iraq was flourishing before the occupation. From 1990 to 2003, the UN Security Council imposed economic sanctions on Iraq that were the harshest in the history of global governance. But along with the sanctions, at least, came an elaborate system of oversight and accountability that drew in the Security Council, nine UN agencies, and General Secretary himself.

The system was certainly imperfect, and the effects of the sanctions on the Iraqi people were devastating. But when the United States arrived, all semblance of international oversight vanished.

Under enormous pressure from Washington, in May 2003 the Security Council formally recognized the occupation of Iraq by the Coalition Provisional Authority (CPA) in Resolution 1483. Among other things, this resolution gave the CPA complete control over all of Iraq’s assets.

At the same time, the Council removed all the forms of monitoring and accountability that had been in place: there would be no reports on the humanitarian situation by UN agencies, and there would be no committee of the Security Council charged with monitoring the occupation. There would be a limited audit of funds, after they were spent, but no one from the UN would directly oversee oil sales. And no humanitarian agencies would ensure that Iraqi funds were being spent in ways that benefitted the country.

In January 2003, the UN prepared a working plan anticipating the impact of a possible war. Even with only “medium impact” from the invasion, the UN expected that humanitarian conditions would be severely compromised.

Because the Iraqi population was so heavily reliant on the government’s food distribution system (a consequence of international sanctions), the UN anticipated that overthrowing the Iraqi regime would also undermine food security. And because the population already suffered from extensive malnutrition, this disruption would be quite lethal, putting 30 percent of Iraqi children under five at risk of death. The UN noted that if water and sewage treatment plants were damaged in the war, or if the electrical system could not operate, Iraqis would lose access to potable water, which would likely precipitate epidemics of water-borne diseases. And if electricity, transportation, and medical equipment were compromised, then the medical system would be unable to respond effectively to these epidemics.

During the occupation, much of this came to pass. A June 2003 UN report noted that the postwar water and sewage systems for Baghdad and other central and southern governorates were “in crisis.” In Baghdad alone, the report estimated that 40 percent of the city’s water distribution network was damaged, leading to a loss of up to half of the city’s potable water through leaks and breaks in the system. And direr still, the UN reported that neither of Baghdad’s two sewage treatment plants was functional, leading to a massive discharge of raw sewage into the Tigris River.

The food situation was similar. The UN found that farming had collapsed due to “widespread insecurity and looting, the complete collapse of ministries and state agencies—the sole providers of essential farming inputs and services—together with significant damages to power supplies.”

Likewise, the health system deteriorated dramatically. Less than 50 percent of the Iraqi population had access to medical care, due in part to the dangers associated with travel. Additionally, the report estimated that 75 percent of all health-care institutions were affected by the looting and chaos that occurred in the aftermath of the war. As of June 2003, the health system as a whole was functioning at 30-50 percent of its pre-war capacity. The impact was immediate. By early summer, acute malnutrition rates had doubled, dysentery was widespread, and little medical care was available. In August, when a power outage blacked out New York, the joke going around Baghdad was “I hope they’re not waiting for the Americans to fix it.”

The CPA gave responsibility for humanitarian relief to the U.S. military—not to agencies with experience in humanitarian crises—and marginalized the UN’s humanitarian relief agencies.  Over the 14-month course of the CPA’s administration, the humanitarian crisis worsened.  Preventable diseases like dysentery and typhoid ran rampant. Malnutrition worsened, claiming the lives of ever more infants, mothers, and young children. All told, there was an estimated 100,000 “excess deaths” during the invasion and occupation—well above and beyond the mortality rate under Saddam Hussein, even under international sanctions.

The CPA’s priorities were clear. After the invasion, during the widespread looting and robbery, occupation authorities did little to protect water and sewage treatment plants, or even pediatric hospitals. By contrast, they provided immediate protection for the oil ministry offices, hired a U.S. company to put out oil field fires, and immediately provided protection for the oil fields as well.

Over the course of the occupation, huge amounts of money simply disappeared. Kellogg, Brown, and Root (KBR), a subsidiary of Halliburton, received over 60 percent of all contracts paid for with Iraqi funds, although it was repeatedly criticized by auditors for issues of honesty and competence. In the last six weeks of the occupation, the United States shipped $5 billion of Iraqi funds, in cash, into the country, to be spent before the Iraqi-led government took over. Auditor reports indicated that Iraqi funds were systematically looted by the CPA officials: “One contractor received a $2 million payment in a duffel bag stuffed with shrink-wrapped bundles of currency,” read one report. “One official was given $6.75 million in cash, and was ordered to spend it one week before the interim Iraqi government took control of Iraqi funds.”

U.S. officials were apparently unconcerned about the gross abuses of the funds with which they were entrusted. In one instance, the CPA transferred some $8.8 billion of Iraqi money without any documentation as to how the funds were spent. When questioned about how the money was spent, Admiral David Oliver, the principal deputy for financial matters in the CPA, replied that he had “no idea” and didn’t think it was particularly important. “Billions of dollars of their money?” he asked his interlocutor. “What difference does it make?”

In the end, none of this should be terribly surprising—the corruption, the indifference to human needs, the singular concern with controlling Iraq’s oil wealth. It was obvious from the moment that the Security Council, under enormous pressure from the United State, passed Resolution 1483.

By systematically removing nearly every form of oversight from their self-imposed administration of Iraq, the United States and its allies laid the foundation for the looting of an entire nation’s wealth, abetted by their own wanton indifference to the needs and rights of Iraqis. Ten years after the start of the war, the CPA’s disastrous governance of Iraq stands alongside the country’s horrifying descent into violence as a dark legacy in its own right.

This article was cross-posted from Foreign Policy in Focus.

18 thoughts on “America’s Other Dark Legacy in Iraq”