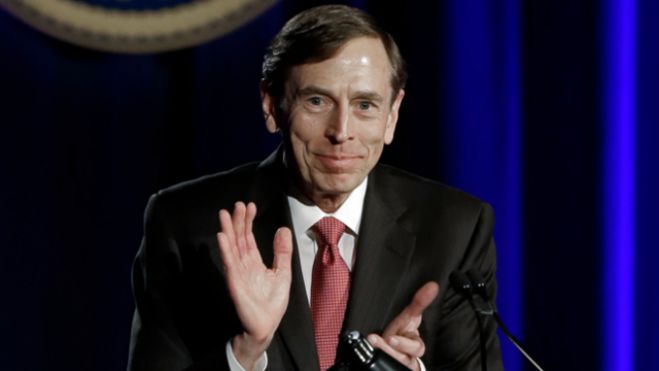 Looking perhaps a little smaller, bereft of his familiar chestful of medals or his over-starched ACUs (Army Combat Uniform), (Ret.) Gen. David Petraeus began his road to public redemption this week with a speech designed to make him look contrite over an extra-marital affair with a woman who served as both protege and biographer and had especially close access to his inner leadership circle in Afghanistan, Paula Broadwell.

I say “public redemption” because we are media-jaded enough to know: ever since Bill Clinton was able to dodge and weave and Oprahfy his way out of impeachment and a soiled legacy (albeit with huge help from his wife and the hypocrite Republicans witch-hunting him on the other side), such falls from grace are easily overcome if one follows The Formula. It usually calls for a public apology or self-flagellation of some sort. If the media likes you already and is sad for your demise, all the better.

This week I’ve noticed no less than four (not counting Petraeus) such redemptions on the rise or in already full good standing with the fickle yet forgiving (not to mention dull and attention-deficited) American public. I read in this Atlantic piece that ex-con “Casino Jack” Abramoff, whose swindle of Native Americans was much gentler (but no less diminishing) than dear old Andrew Jackson’s dark dealings, is now getting $15,000 a speech, has his own radio show and is back charming the press — all because he embraces his own smarminess as a learning tool for others.

Then in a typically milquetoast column by Al Kamen at The Washington Post, we hear that prostitute proffering pol, Sen. David Vitter, is “back in the good graces of voters and colleagues alike,” and that former Gov. Mark Sanford, who actually disappeared for six days while having an affair, “has a legitimate shot at becoming the Republican candidate” for a special congressional election.

Then, NC-17 Twitterbug Anthony Weiner, a former (married) congressman from New York who couldn’t keep his underpants and his texting separate, has reportedly “tested the waters with polls” gauging the public’s willingness to give him another try. Not sure what the testing has “revealed,” but just the mention of it suggests he thinks he is on the road to Clintemption, too.

The thing with Petraeus is his journey is going to be a short one, guarantee it. You can see it in the writing accompanying the story of his “apology speech.” He is invariably called “hero of the Iraq and Afghanistan wars,” who “was credited with reshaping the nation’s counterinsurgency strategy,” and “turning the tide in the U.S favor in both Iraq and Afghanistan and making the U.S safer from terrorism.” (That was from the “liberal” AP by the way.

The AP went on:

Another longtime crisis communications expert, Howard Bragman, said Petraeus has handled the situation perfectly so far and he expects he’ll continue to do so. He noted that unlike former President Bill Clinton, former U.S. Sen. John Edwards and other public figures caught in extramarital affairs, Petraeus didn’t try to lie his way out of it, immediately took responsibility and moved on.

“I think the world is open to him now,” said Bragman, vice chairman of the image-building company Reputation.com. “I think he can do whatever he wants. Realistically, he can even run for public office, although I don’t think he’d want to because he can make more money privately.”

Here’s the real rub of it. Like disgraced Gen. Stanley McChrystal, Petraeus in his suit and tie won’t miss the medals (but don’t bet he won’t take them out from time to time), because he is going to be making tens of thousands of dollars tooling around the country, giving speeches, teaching doe-eyed college kids and consulting the hell out of the Beltway. Getting the apology out of the way makes it all happen faster.

This is not about sex. It is about betrayal. This is about consequences. Most importantly, it is about accountability, and the road Petraeus is taking will offer very little of that to us. He’ll leave us and our petty little disagreements over lies and torture and the failed strategy in Afghanistan far behind. Forget Paula Broadwell — that’s already ancient history. He’ll find plenty of new friends for the jump seat and even more VIP perks along the way.

Isn’t that what matters most in our Oprahfied, spoon-fed corn pone world?