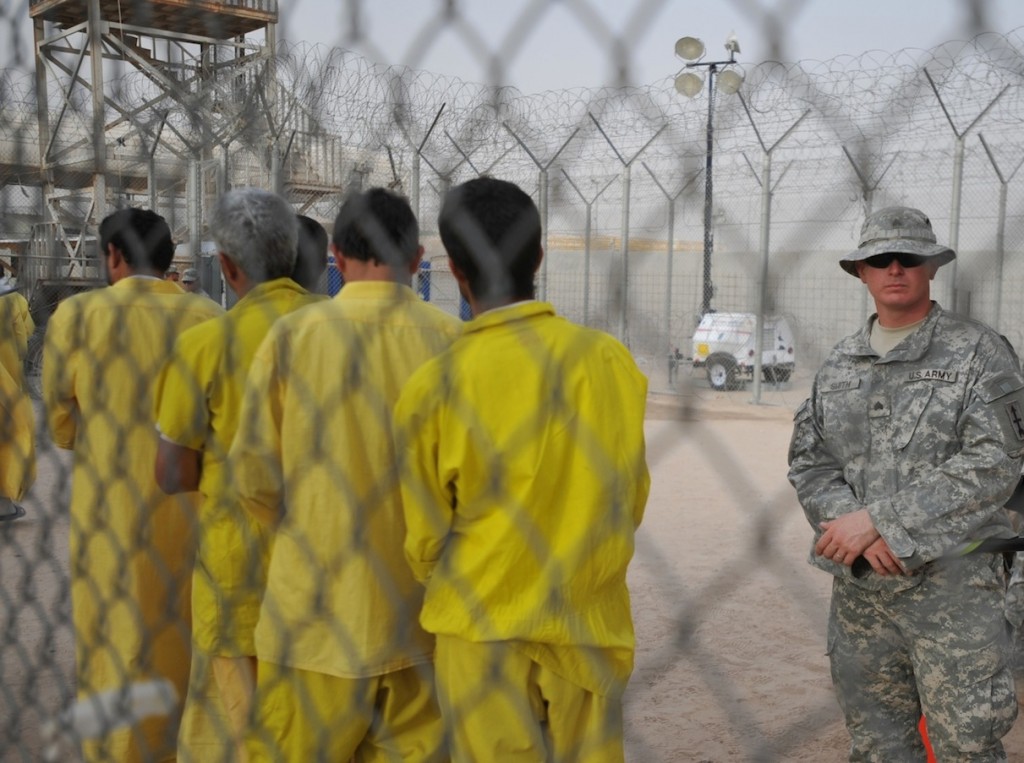 The Guardian has published a report based on new interviews with British soldiers who witnessed torture and abuse of Iraqi detainees at the US-run prison Camp Nama following the invasion in 2003.

“On the 10th anniversary of the invasion of Iraq,” the report says, a number of British personnel who cooperated with US forces and officials at Camp Nama “have come forward to describe the abuses they witnessed,” which include:

The full extent of the torture and abuse that took place in US-run facilities in Iraq will never be known. Most Americans think the scandal went no farther than a few bad apples at Abu Ghraib, where leaked photographs revealed  blood-streaked floors, detainees on dog collars, sadistic sexual abuse, evidence of homicide and more. But the true scandal was bigger. Much bigger.

Suspects were brought to the secret prison at Baghdad International airport, known as Camp Nama, for questioning by US military and civilian interrogators. But the methods used were so brutal that they drew condemnation not only from a US human rights body but from a special investigator reporting to the Pentagon.

A British serviceman who served at Nama recalled: “I saw one man having his prosthetic leg being pulled off him, and being beaten about the head with it before he was thrown on to the truck.”

The abuse at Camp Nama has been reported before. One Army intelligence sergeant “told his commander three members of the counterintelligence team had hit detainees, pulled their hair, tried to asphyxiate them and staged mock executions with pistols pointed at the detainees’ heads,” The Washington Post reported in 2005. In 2006, The New York Times revealed that American interrogators at Camp Nama severely beat detainees and even shot paintball guns at them for target practice, among other cruelties.

“Torture and other abuses against detainees in U.S. custody in Iraq were authorized and routine, even after the 2004 Abu Ghraib scandal,” Human Rights Watch found in 2006. According to the report, “detainees were routinely subjected to severe beatings, painful stress positions, severe sleep deprivation, and exposure to extreme cold and hot temperatures.”

Many of these reports indicated there was official sanction of this abuse from high up the US chain of command, including full knowledge of it by Stanley McChrystal. The Guardian report adds further weight to this, revealing that UK soldiers had to go through certain procedures because US officials knew they would be in violation of international law.

…[O]ne peculiarity of the way in which UK forces operated when bringing prisoners to Camp Nama suggests that ministers and senior MoD officials may have had reason to know those detainees were at risk of mistreatment. British soldiers were almost always accompanied by a lone American soldier, who was then recorded as having captured the prisoner. Members of the SAS and SBS were repeatedly briefed on the importance of this measure.

It was an arrangement that enabled the British government to side-step a Geneva convention clause that would have obliged it to demand the return of any prisoner transferred to the US once it became apparent that they were not being treated in accordance with the convention. And it consigned the prisoners to what some lawyers have described as a legal black hole.

And what failed to stop after Abu Ghraib also did not end with Camp Nama. On May 30, 2006, “a joint US-Iraqi inspection” of an Iraqi detention facility “discovered more than 1,400 detainees in squalid, cramped conditions,” many of whom were illegally detained, according to a confidential State Department cable released by WikiLeaks. Prisoners “displayed bruising, broken bones, and lash-marks, many claimed to have been hung by handcuffs from a hook in the ceiling and beaten on the soles of their feet and their buttocks.”

The inspectors found a torture contraption where ”a hook…on the ceiling of an empty room at the facility” was “attached [to] a chain-and-pulley system ordinarily used for lifting vehicles” and that “apparent bloodspots stained the floor underneath.” All 41 prisoners interviewed by US inspectors had reported being tortured and 37 juveniles were held illegally.

Also revealed by WikiLeaks cables was the US military order Frago 242, which discouraged US forces from taking note when Iraqi interrogators engaged in torture and abuse.

Many in the media have spent the last three weeks pouring over decisions about the Iraq War, marking the 10th anniversary of the invasion. The strategic and moral case for the war was justifiably the focus of this flood of commentary, with nary a word about the rampant torture and abuse that went on in countless prisons and black cites in Iraq following the invasion. The list of Bush administration atrocities and war crimes, I suppose, is too long to get equal attention.

125 thoughts on “Camp Nama: New Details of the US-Run Torture Prison in Iraq”