In response to increasing cross-border collaboration between al-Qaeda in Iraq (AQI) and Jabhat al-Nursa, AQI’s offshoot in the Syrian rebel opposition, the Iraqi government informally requested the US conduct drone strikes against the militants, The Associated Press reports. 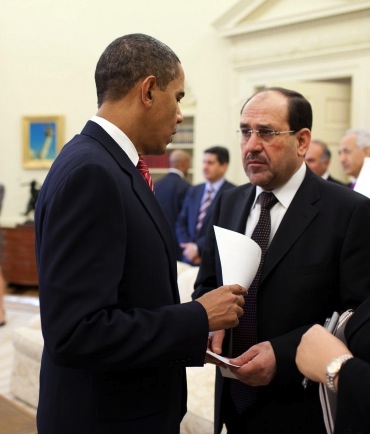 Now, the White House has already directed the CIA to increase its cooperation and backing of Iraqi state militias to fight al-Qaeda affiliates there and cut off the flow of fighters pouring into Syria. There are already plenty of problems with boosting support for Iraq’s security forces, which have essentially been used as a secret police force for Maliki to attack, detain, and torture his political opponents.

But “conducting kinetic operations for [Iraq] could quickly draw the United States into creating additional enemies out of what are domestic and regionally-focused terrorist groups,” writes Micah Zenko at the Council on Foreign Relations.

“The CIA already serves as the counterterrorism air force of Yemen, and, occasionally, Pakistan. It should not further expand this chore to Iraq,” Zenko adds.

According to the AP report, the Obama administration refused to respond to Iraq’s appeal “until the Iraqi leadership’s top level makes a formal request, which hasn’t happened.”

Aside from the problem of getting even more irreparably mired in regional conflicts that don’t directly concern us, there are several factors that should preclude Obama from taking Baghdad up on its request.

First, if we start bombing Jabhat al-Nusra along the Iraq-Syria border, it will redirect the attention of militants preoccupied with Iraq and Syria towards the US. And judging by the drone war’s record elsewhere, the campaign would undoubtedly lead to additional civilian casualties, giving an additional boost for jihadists.

The second issue Zenko brings up is the lack of legal basis for just bombing the Iraq-Syria border because Baghdad asked us to. But really, Washington doesn’t give a hoot about following the law; it does what it wants. The Obama administration’s legal justifications for the drone war in Pakistan and Yemen – which were always incredibly thin – unsurprisingly gives them incredible latitude.

According to the leaked Justice Department legal memo on targeted assassinations, all that’s necessary is for the US government to say the targets are “senior operational leaders” of al-Qaeda or “an associated force.”

At variance with international laws, the Obama administration dropped the requirement of “imminence” to justify the use of force.

“The condition that an operational leader present an ‘imminent’ threat of violent attack against the United States does not require the United States to have clear evidence that a specific attack on U.S. persons and interests will take place in the immediate future,” the memo states. In other words, it is irrelevant to Obama that Jabhat al-Nusra and AQI are domestically focused on Syria and Iraq and not the US. They need not be a threat to justify bombing, or so goes the doctrine.

The Los Angeles Times reported last month that the CIA had already begun sizing up Islamic extremists in the Syrian opposition for drone strikes. So an official, formal request by the Iraqi government might just give the Obama administration the opening it wants to open up yet another front in its endless, unlimited drone war.

21 thoughts on “Is the US Opening Up Another Front in the Drone War on the Iraq-Syria Border?”