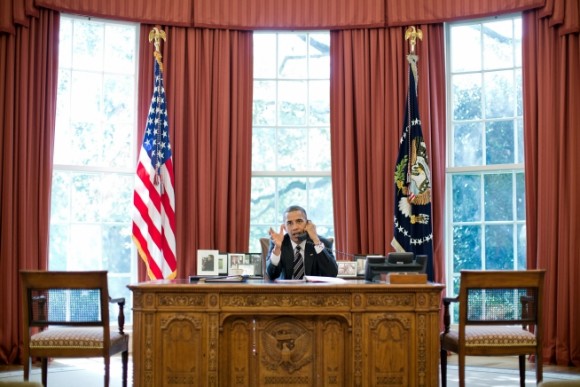 After months of being reluctant to address it, the White House today announced it now believes the Syrian regime of Bashar al-Assad has used chemical weapons in its bloody, two-year civil war.

“Our intelligence community does asses with varying degrees of confidence that the Syrian regime has used chemical weapons on a small scale in Syria, specifically the chemical agent Sarin,” the administration said in a letter.

This seems to violate President Obama’s “red line,” triggering some unspecified action presumed to be military in nature. Commentators are now saying the likelihood of a direct US military intervention is greater than ever. While it’s not clear whether that’s true, this talk about a “red line” is bogus.

Obama’s ‘Red Line’ Has Shifted Before

Last year, President Obama outlined what would be a “red line” for his administration, beyond which arguments against going to war in Syria would lose their weight. In August 2012 he said, “A red line for us is we start seeing a whole bunch of chemical weapons moving around or being utilized.”

And then in December when reports came out about the Assad regime “moving around” stockpiles of chemicals, with some analysts saying they were being mixed and possibly weaponized, the Obama administration stayed silent.

“Mr. Obama’s ‘red line’ appears to have shifted,” The New York Times reported. “His warning against ‘moving’ weapons has disappeared from his public pronouncements,” being replaced with a “new warning” that “if Mr. Assad makes use of those weapons, presumably against his own people or his neighbors, he will face unspecified consequences.”

The Obama administration has consistently noted the overwhelming costs of military action in Syria. The “red line” is just an obligatory warning meant to make them seem concerned about humanitarian suffering and to maintain the credibility of their threats of war. It has proven malleable before, and the administration could just as easily back out of it again.

Chemical Weapons Are Not a Game Changer

The supposed line that chemical weapons cross is almost entirely fictional. Consider Bilal Y. Saab, Executive Director of the Institute for Near East and Gulf Military Analysis, on why Obama’s supposed red line on the use of chemical weapons “lacks credibility.”

Indeed, chemical weapons hold a special place in the international psyche, but they are no more a threat to civilian life really than what has already been going on in Syria. If too much mass death were really the trigger for US intervention, why wasn’t the line drawn at 10,000? 30,000? UN estimates go as high as 70,000 dead. Any of these figures could have been used by the administration as a last straw, but there hasn’t been any intervention.

Obama Sees the Military Options as Too Costly

US military officials have been quick to point out the costs of war in Syria. A year ago, White House spokesman Jay Carney told a press conference, “We do not believe that militarization, further militarization of the situation in Syria at this point is the right course of action. We believe that it would lead to greater chaos, greater carnage.”

“We do nobody a service when we leap before we look, where we…take on things without having thought through all the consequences of it,” Obama said in a January 2013 interview with CBS. “We are not going to be able to control every aspect of every transition and transformation” in conflicts around the world, he added.

“In a situation like Syria,” he said in a separate interview with The New Republic, “I have to ask, can we make a difference in that situation? Would a military intervention have an impact? How would it affect our ability to support troops who are still in Afghanistan? What would be the aftermath of our involvement on the ground? Could it trigger even worse violence or the use of chemical weapons? What offers the best prospect of a stable post-Assad regime?”

In Senate testimony earlier this month, Defense Secretary Chuck Hagel said “military intervention at this point could hinder humanitarian relief operations. It could embroil the United States in a significant, lengthy, and uncertain military commitment. Unilateral military action could strain other key international partnerships, as no international or regional consensus on supporting armed intervention now exists. And finally, military intervention could have the unintended consequence of bring the United States into a broader regional conflict or proxy war.”

The truth is, the US lacks feasible military options. A no-fly zone is likely to put more civilians at risk, and bombing the chemical stockpiles would be about as bad as Assad unleashing them on his own targets. If the US were to move in with ground forces to secure the weapons, it would take at least 75,000 troops, and any limited mission to secure the weapons would lend itself to mission creep and eventually turn into regime change with no viable interim government, which would then turn into a long and bloody occupation costing hundreds of thousands of lives and trillions of dollars as it did in Iraq. Finally, the intervention would lack both domestic and international legal legitimacy. This doesn’t even get me started on the far-reaching geo-political consequences.

Maybe the Obama administration will be goaded into war in Syria because of pressure from European allies (who won’t be doing the heavy lifting themselves) and from rabid interventionists in Congress of the John McCain type. But US reluctance thus far should temper fears that such a scenario is imminent.