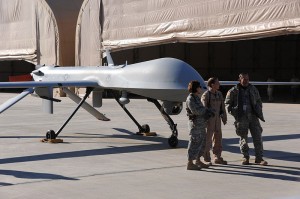 In the past few days, two different Atlantic writers have worried that drones are a “sexy” subject which often overshadow other issues. Now, Andrew Cohen’s article isn’t really about war or drones. It’s a reminder that it’s not only Anwar al-Awlaki who didn’t get due process. Thousands of other Americans aren’t getting theirs either. (It’s well worth reading.)

Amitai Etzioni, sociologist and former adviser to Jimmy Carter, wrote a different sort of piece — “Everything Libertarians and Liberals Get Wrong About Drones” — in which he scornfully dubs drones “the new cause célèbre” of certain folks who are missing the point and worrying about the wrong things.

Troubled that there’s no presidential authority for drone strikes? Etzioni offers up the Authorization for Use of Military Force, as if that disturbingly-broad document is the answer to executive and legislative excess, as opposed to one of its strongest mechanisms. No Congressional oversight for the program? Congress is “regularly briefed.” (Some members of Congress get limited information about the program.)

Concerned that the Department of Justice’s lethal force mandate of “imminent threat” is incredibly vague? Well, terrorists don’t wear uniforms!!! Some people, writes Etzioni, actually think that terrorists deserve some kind of judicial justice, not just a Hellfire missile. But “why should terrorist suspects be granted all the gold-plated protections available to Americans”? (Cohen must have cringed there.)

What if drone strikes provoke hostility abroad? “[T]hose who are inclined towards terrorism already loathe the United States for a thousand other reasons.” Stories of Pakistani and Yemeni citizens frightened to leave the house because of drones? Well, “we often have to rely upon reports from locals, who are notoriously unreliable.”

Do drones make war easier? No, long ago, bombs and airplanes were thought to be cold, clinical methods of killing that would make bloodshed easier. (Well — aren’t they? How did World War II manage to wipe out 60 million people, if not in great part to the ease of death from thousands of feet above?) And, asks Etzioni:

Would the people involved in Afghanistan, Pakistan, Yemen, and now in Africa be better-off if terrorists were killed in “hot” blood — say, knifed by Special Forces, blood and brain matter splashing in their faces? Would the world be better off if our troops, in order to reach the terrorists, had to endure improvised explosive devices blowing up their legs and arms and gauntlets of fire from AK-47s and rocket-propelled grenade launchers — traumatic experiences that turn some of them into psychopath-like killers?

Is it really just IEDs that lead to epidemic levels of Post-Traumatic Stress in veterans? Nothing soldiers do in war, or are trained to do, have anything to do with their often-fractured mental state? That deeply disingenuous paragraph is followed by another:

Beyond such considerations, there is so far no evidence that the extensive use of drones has made going to war more likely or its extension more acceptable. Anybody who has followed the United States’ withdrawal from Afghanistan and Iraq despite the recent increase in drone strikes should know better.

Anyone who just wrote the words “Pakistan, Yemen, and now Africa” should know better as well. What exactly does Etzioni think is happening in those nations?

Near the end, Etzioni stumbles over a few shards of good point. Drones are not in themselves the same as a bad foreign policy. They’re morally neutral technology. Generally more important than how wars are fought is whether they should happen at all. Boots on the ground are always worst. But just because drones are currently a popular, convenient shorthand for war — the journalist, activist, and occasional politician’s hook for worrying about foreign adventures — doesn’t mean that the new technology doesn’t itself raise new worries. Regardless, let drones be the segue we use to talk about war, as long as we’re talking.