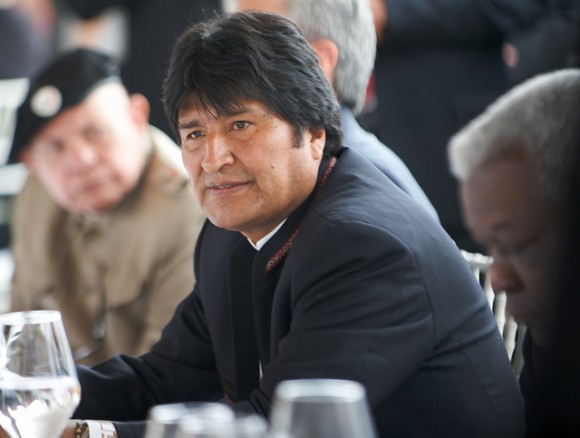 Jake Johnston at the Center for Economic and Policy Research:

The role of USAID in Bolivia has been a primary point of contention between the U.S. and Bolivia dating back to at least 2006. State Department spokesperson Patrick Ventrell characterized Morales’ statement as “baseless allegations.” While State Department spokespeople and many commentators will characterize USAID’s work with oppositional groups as appropriate, a look at the agency’s work over the past decade paints a very different picture.

Documents obtained by investigative journalist Jeremy Bigwood show that as early as 2002, USAID funded a “Political Party Reform Project,” which sought to “serve as a counterweight to the radical MAS [Morales’ political party] or its successors.” Later USAID began a program “to provide support to fledgling regional governments,” some of which were pushing for regional autonomy and were involved in the September 2008 destabilization campaign that left some 20 indigenous Bolivians dead. Meanwhile, the U.S. has continually refused to disclose the recipients of aid funds. As a recent CEPR report on USAID activities in Haiti concluded, U.S. aid often goes into a “black box” where it becomes impossible to determine who the ultimate recipients actually are.

Undermining governments in Latin America that are not obedient enough is something of a national past-time in Washington. During the Cold War especially, we overthrew whatever democratically elected government rubbed us the wrong way. But old habits die hard.

In 2002, USAID was caught up in allegations that the Bush administration either encouraged or was complicit in the attempted military coup to overthrow Venezuela’s Hugo Chavez. There indeed was direct involvement: State Department cables released by WikiLeaks documented an explicit policy of trying to undermine the Chavez government and noted USAID as being the primary administrator in that project. Bush administration officials later admitted having met with the coup plotters prior to the attacks, but insisted they asked for “constitutional” methods, not military.

There was another Latin American coup in Honduras in 2009, and while there is no evidence that the Obama administration participated in it, the marked increase in money and weapons flowing from Washington to the military regime in Honduras is notable. Washington’s own commando-style troops have been working closely with Honduran police in training and weapons procurement, even as reports of extra-judicial killings, disappearances and other human rights abuses have increased.

Recently, allegations that US-backed security forces are essentially running death squads have reached such a fever pitch that Washington was forced to respond. The State Department this week reassured the public that taxpayer money “only goes to specially vetted and trained units that don’t operate under the direct supervision of a police chief once accused of extrajudicial killings and ‘social cleansing,’” reports The Associated Press.

That police chief is one Juan Carlos Bonilla, who has been accused of, and in one case tried for, extra-judicial killings and disappearances of dozens of people. While US and Honduran officials promise US support doesn’t go to any forces under Bonilla’s command, evidence suggests otherwise.

“Since early 2010,” writes Dana Frank in a piece at Foreign Affairs, ”there have been more than 10,000 complaints of human rights abuses by [US funded and trained] state security forces,” and “in many ways, Washington is responsible for this dismal turn.” Meanwhile, the USAID website claims their “strengthen the participation of marginalized groups in local and national governance.”

So is it surprising to anyone that Evo Morales has expelled USAID?

11 thoughts on “Bolivia Expels USAID Because They ‘Continue to Conspire’”