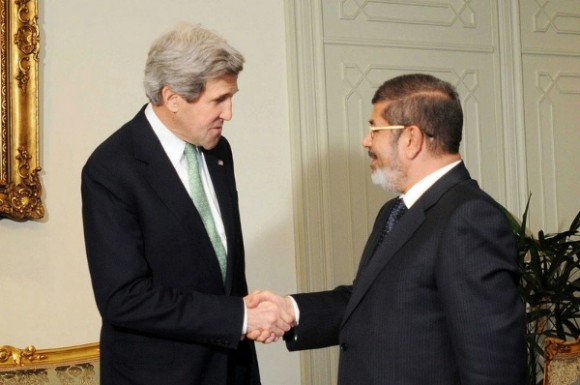 There is a bit of déjà vu happening in Egypt right now: as mass protests against the Morsi regime continue to grow, the Egyptian army gave the regime a 48-hour ultimatum, threatening direct military involvement in the political process “if the demands of the people are not realized.” In other words, if Morsi doesn’t either step down or call for early elections, the army will move to unseat him, just as happened when the protest movement prompted the ouster of Hosni Mubarak in 2011.

But, as the Guardian is reporting, the Morsi regime believes that is impossible unless Washington wants new leadership.

The head of Egypt’s armed forces, General Abdel Fattah Sisi, threatened direct military involvement in the political process “if the demands of the people are not realised”, in a statement implying that Morsi should either step down or at least call early elections.

The presidency indicated that it viewed the statement as a coup d’etat, and implied that Morsi was safe as long as his administration still had US support.

“Obviously we feel this is a military coup,” a presidential aide said. “But the conviction within the presidency is that [the coup] won’t be able to move forward without American approval.”

This should serve as a much-needed corrective to claims that the Obama administration relinquished America’s imperial holdings in Egypt and allowed the democratic process post-Mubarak to take hold unencumbered. As Egypt’s rulers see it, so long as the overlords in Washington want them to stay in power, then stay in power they will – regardless of what the public desires.

“[T]he U.S. strategy in the region is to prefer a managed transition to civilian rule and democratic governance as long as the American major strategic objectives are not challenged,” wrote Esam Al-Amin last year. Namely, to “keep the Americans in, the Chinese and Russians out, the Iranians down, and the Israelis safe.”

And as The New York Times reported last year, US aid to Egypt helps keep the pockets of defense corporations nice and full.

Granted, the Egyptian military is no benevolent savior in all this. They continue to have entrenched interests within Egypt’s power structure and have a record of serious abuse. Their gripe with Morsi is probably not about fulfilling their commitment to national self-determination. But when the military finally turned on Mubarak in 2011, demonstrators in Tahrir Square held up Egyptian soldiers on their shoulders and handed babies to tank operators rolling through the streets.

It’s hard to argue that the U.S., who has propped up a dictatorship in Egypt for decades in order to serve its own geo-political interests of control and domination, should have more of a say in Egyptian politics than the protesters and anyone who apparently speaks on their behalf.