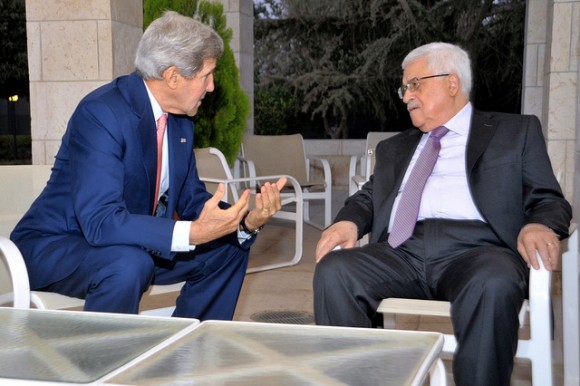 Secretary of State John Kerry has now gone to Israel-Palestine six times in five months in an attempt to restart negotiations between the two parties. One wonders what in the world he is saying in these private, one-on-one meetings.

As Kerry shuttles back and forth, so far unable to get the parties to agree to meet, a great misconception about the Israeli-Palestinian conflict is bolstered. Many Americans don’t have a clue about the details of the situation (a poll last year found that up to 58 percent “are unsure or have no opinion on most issues” having to do with the conflict) and many can’t even accurately describe the broad outlines of the matter.

In this ignorance, the apparent inability to resolve the longstanding conflict has led many Americans to believe it is just so complicated it can’t be solved equitably. But it isn’t complicated, and even if it were, that isn’t what has impeded progress. Really, it has been America’s one-sided support for Israel that has blocked a political settlement for all these years.

Large majorities of Palestinians support a two state solution based on the 1967 borders. The problem is that successive Israeli governments have rejected such a resolution in favor of continued military occupation of the West Bank (and Gaza until 2005, and since in the form of an economic blockade and frequent bombing campaigns) and continued building of Jewish settlements in the West Bank, in a process of systematic dispossession of their land which the whole world agrees is criminal under international law.

Indeed, the European Union just this week barred any funding of Israeli settlement projects through any of its agencies, to the dissatisfaction of Israel, who expects to continue receiving foreign aid no matter how cruel and illegal its policies are.

In the meantime, Jewish settlers in the West Bank systematically harass and attack the Palestinian population in a phenomenon described by the speaker of the Israeli Knesset as “Jewish terrorism.” Property vandalism, rock throwing, and destruction of Palestinian crops and olive groves (their only livelihood) are most common.

A recent report from the European Union warned that, “if current trends are not stopped and reversed, the establishment of a viable Palestinian state within pre-1967 borders seem more remote than ever.”

There is no reason for the settlements except expansion of Israeli state territory. The charter of the current political party in power in Israel states explicitly that Jewish settlement in the West Bank and Gaza is “the realization of Zionist values” and describes the whole of the West Bank and Jerusalem as belonging to Israel.

Israeli occupation policy hasn’t changed very much since Israeli military leader and politician Moshhe Dayan said after the Six Day War: “We don’t have a solution, and you will continue living like dogs, and whoever wants will go, and will see how this procedure will work out.” Or, perhaps more accurately, it follows what Lara Friedman and Daniel Seidemann in Foreign Policy called the “everybody knows fallacy,” namely that Israel’s gradual and continuous expansion onto Palestinian land is premised “on the grounds that ‘everybody knows’ these areas will always be part of Israel.”

As such, Israeli policy opposes a settlement. Kerry can go back and forth all he wants. But unless America stops supporting Israeli expansion and, thus, the dissolution of Palestine, no settlement is possible.

39 thoughts on “Why Kerry Will Fail in Israel-Palestine”