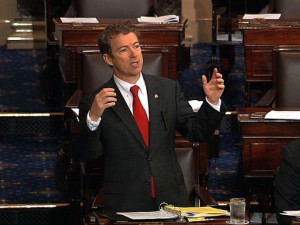 New Jersey Gov. Chris Christie recently trashed Sen. Rand Paul, and other members of the more freedom-friendly corner of the GOP (like Rep. Justin Amash and his noble effort to reign in the NSA). Christie, sounding like Rudy Giuliani circa 2007, said that pro-privacy folks like Paul need to stop all their dangerous libertarianish thoughts because it’s offensive to 9/11 victims and it endangers us all. Christie also spoke approvingly of both Bush and Obama’s security efforts. Terrorism, to the Gov., is still such a big threat that it justifies certain scary-sounding, privacy-violating programs. And he’s not alone in believing that nonsense.

It is nonsense. But what if it were true? What if terrorism was as big a threat as security hawks claim, and that we could — at least — believe that the NSA is working to protect the American people from being killed? What if the FBI was actually stopping more threats than it was inciting? And what if they and other law enforcement hadn’t failed to stop planned attacks from the Boston Bombing to 9/11? What if secret courts, secret laws, and secret interpretations really could be trusted because they’re “legal”? And what if the NSA only searched through the metadata of millions of Americans when they were really, really, looking for something serious? They need the haystack to find the needle, but maybe they really have no interest in a few million innocent needles?

Even if this narrative about national security and the level of threat presented by terrorism were true — and of course it isn’t — powerful people simply do not keep these serious violations of privacy under glass until the most dire emergency. Consider, for a moment, the drug war’s history in the decline of the Fourth Amendment.

In 1971, Richard Nixon declared a war on drugs and tested the waters with a DC bill that made no-knock raids legal on private homes. Some years later, Ronald Reagan stepped up that war, and unlike Nixon, most of the powers that Reagan claimed — and the Supreme Court frequently confirmed — were not ever taken away. The cop, court, and Constitutional drug war mess needs more detail than there is space here (check out Radley Balko’s Rise of the Warrior Cop, as well as Antiwar’s interview with him for more of that history) but  really, once upon a time, when terrorism wasn’t keeping the paranoid up at night, a bunch of people decided that enemy number one was drugs. And no violation was too serious, no quarter was to be given in this fight. Sound familiar?

The effects of that decision to go to “war” can now be seen in the prison-industrial complex, militarized police and their mission creep, and our comatose Fourth Amendment.

Here are just a few figures: in 2012 87 percent of state and federal law enforcement wiretaps were over narcotics, with stats from the past decade showing similar numbers. “Sneak and peak” warrants — legalized by the PATRIOT Act — between 2009 and 2010 were used for narcotics investigations 76 percent of the time. And what is the NYPD’s contentious “stop and frisk” policy if not a massive violation of the privacy of (mostly black and Hispanic) New Yorkers?

Previously at Antiwar I critiqued libertarian John Stossel’s bizarre refusal to admit that the NSA spying is dangerous. But Stossel did indeed have a point within the madness –the drug war started it. Not only are terror-fighting tools used to investigate drug crimes much of the time, but many privacy protections were already chipped away by the drug war decades before 9/11.

Recently Rand Paul pestered the Federal Bureau of Investigation (FBI) for clarification about their use of domestic drones. The FBI responded with a few details including that drones have been used for “eight criminal cases and two national security cases” since 2006.  The most notable thing mentioned in their report is that the FBI did not see fit to get a search warrant for their drone use, since the targets of their investigations didn’t have an expectation of privacy. This isn’t particularly surprising, more a depressing confirmation of what we would already have suspected.

As noted by The Verge, the Supreme Court ruled in Florida v. Riley (1989) — a drug war case! — that a warrant wasn’t necessary when the police wanted to use a helicopter to hover 400 feet above a suspect’s property. If the Fourth Amendment has withered in the face of the cops’ need to catch those damn weed growers, it’s difficult not to feel frightened at the prospect of cheap, quiet, drones in the thousands creeping into our airspace; technology getting ahead of any lingering protections the Fourth Amendment still offers. And there is no doubt that the same people now defending the NSA, wiretapping, and anything else done in the name of keeping us safe from big bad terrorists will not say a word when drones become the next tool in fighting the lunatic war on drugs.