With blood in Egypt’s streets and a return to a state of emergency, it’s time for Washington to stop pretending. Its efforts to maintain its lines of communication with the Egyptian military, quietly mediate the crisis, and help lay the groundwork for some new, democratic political process have utterly failed. Egypt’s new military regime, and a sizable and vocal portion of the Egyptian population, have made it very clear that they just want the United States to leave it alone. For once, Washington should give them their wish. As long as Egypt remains on its current path, the Obama administration should suspend all aid, keep the embassy in Cairo closed, and refrain from treating the military regime as a legitimate government.

Hundreds of people have been killed in the military’s latest assault on protest encampments and the ensuing clashes. The secular vice president, Mohamed ElBaradei, has resigned and the current ruler of the country, Gen. Abdel Fattah al-Sisi, has ousted the rest of the civilian government and appointed military generals as governors under a “state of emergency.”

Beyond our nefarious entangling alliances, there are more cons and pros in the Obama administration’s continued devotion to the Egyptian relationship – even from the imperial point of view.

“The sensible thing for the U.S. to do at this point would be to suspend aid to the Egyptian military,” writes Daniel Larison at The American Conservative. “It is long past time to suspend that aid in response to the July coup, and it is increasingly difficult to see what the U.S. gains from not doing so.”

This poster, held in the crowds just after the July 3 coup, sums it up fine: 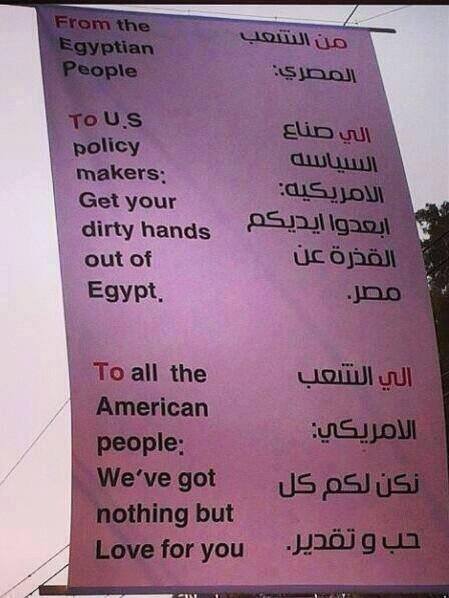