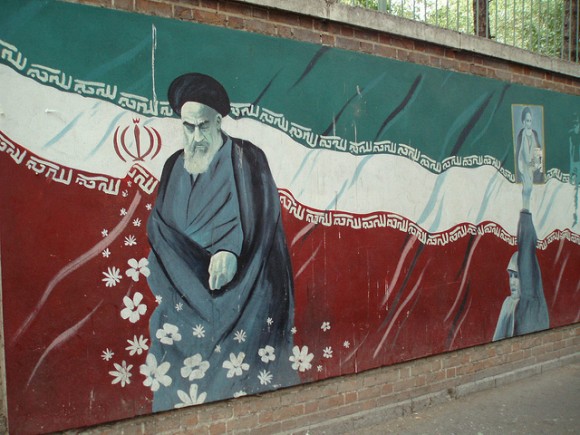 At The National Interest, Joe Costa claims that, in the wake of Iranian president Hassan Rowhani’s election, “the world is the closest it has been to that fine balance in nuclear negotiations with Iran.” There is a new willingness to reach a deal, he argues, and U.S. pressure is beginning to work.

The pressure he refers to includes severe economic sanctions that are putting the economy, and thus the Iranian people, in dire straits, and the military intimidation that is making war seem like an immediate option.

New financial sanctions and restrictions in particular have had the most impact. According to the International Monetary Fund, Iran’s economy has contracted two years in a row. While official Iranian numbers can be unreliable, the best estimates are that inflation hovers around 42 percent and unemployment stands at 28 percent. Oil exports have dropped 40 percent in the past year, with Iran’s currency plunging 50 percent during that same time period. A country that has the fourth-largest proven oil reserves and second-largest natural gas reserves in the world is joined only by Zimbabwe on the World Bank’s delinquent list for failure to pay its loans.

While economic pressure increased, the United States slowly tightened the military noose around Iran. U.S. arms sales to Persian Gulf allies skyrocketed during the Bush administration and have continued to rise under President Obama. From 2007 to 2010, the Gulf Cooperation Council (Saudi Arabia, Kuwait, Bahrain, Qatar, the United Arab Emirates and Oman) led the world in foreign military sales from the United States. In 2011, the Obama administration finalized the largest foreign military sale in U.S. history, with $29.4 billion in new F-15s and upgrades to Saudi Arabia. Last year, a $10 billion arms sale to Israel, Saudi Arabia and the United Arab Emirates was announced (not completed). These deals have provided advanced weaponry to ensure Israel maintains its qualitative military edge in the region, and U.S. Gulf allies retain conventional military superiority vis-à-vis Iran.

The Obama administration has also bolstered the Fifth Fleet in the Persian Gulf with additional ships and air power. Joint exercises between the United States and its Gulf allies have increased in tempo as well, the most recent being a forty-one-country maritime exercise facing Iran’s shores. While some members of Congress may still question whether the Obama administration would resort to force, Ayatollah Khamenei may not be so confident.

Moreover, the pressure for Israel to launch a military strike against Iran’s nuclear program grows with each kilogram of enriched uranium Iranian centrifuges churn out. Israel can afford to wait for negotiations to play out once again this fall, but the endgame is fast approaching. In the absence of a deal, the Supreme Leader risks facing an Israeli strike that may drag America into war.

Conceivably, deliberately impoverishing millions of Iranians, provoking the regime with military exercises, and threatening preventive war could have the effect of persuading Tehran to agree to a deal they view as unfair and a national embarrassment. However, in order for that to be true there has to be some belief on the part of the Iranians that Western talk of a political settlement is genuine. And given recent history, that doesn’t seem to be the case.

As I wrote about last week, the Iranians agreed to a deal twice in the not too distant past, only to be left unreciprocated by Washington. A 2003/2004 deal in which Iran suspended enrichment “resulted neither in recognition of its right to enrichment nor in promised nuclear, technological, economic and security inducements,” according to a recent International Crisis Group report.

And in 2010, the Iranians – through negotiations with Brazil and Turkey – belatedly agreed to the Obama administration’s nuclear swap deal only to have Obama reject the very deal he proposed on the juvenile grounds that Iran’s compliance came too late.

As Harvard professor Stephen Walt has written, the Iranian leadership “has good grounds for viewing Obama as inherently untrustworthy.” Former CIA analyst Paul Pillar has concurred, arguing that Iran has “ample reason” to believe, “ultimately the main Western interest is in regime change.”

The moral of the story is two-fold. First, international bullying is not likely to render cooperation from the Iranians on the nuclear program (especially when there is a consensus in the U.S. intelligence community that Iran has not even decided to pursue nuclear weapons). Second, Washington ought to stop waging economic warfare, militarily encircling Iran, and edging to the brink of war just to maintain control over the oil resources of the Middle East – because after all, that’s what the Iran policy is about…not some fantastical claim that it represents a threat (it doesn’t).