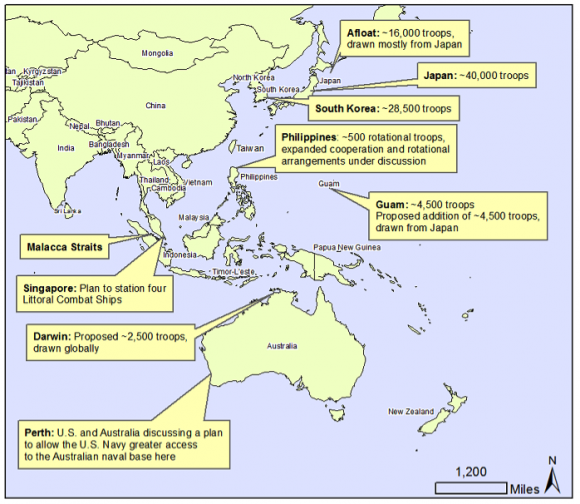 John Reed at Foreign Policy describes “how the U.S. is encircling China with military bases.”

The U.S. military is encircling China with a chain of air bases and military ports. The latest link: a small airstrip on the tiny Pacific island of Saipan. The U.S. Air Force is planning to lease 33 acres of land on the island for the next 50 years to build a “divert airfield” on an old World War II airbase there. But the residents don’t want it. And the Chinese are in no mood to be surrounded by Americans.

…In addition to the site on Saipan, the Air Force plans to send aircraft on regular deployments to bases ranging from Australia to India as part of its bulked up force in the Pacific. These plans include regular deployments to Royal Australian Air Force bases at Darwin and Tindal, Changi East air base in Singapore, Korat air base in Thailand, Trivandrum in India, and possibly bases at Cubi Point and Puerto Princesa in the Philippines and airfields in Indonesia and Malaysia, a top U.S. Air Force general revealed last month.

As I’ve written in the past, these Pentagon plans are part of the Air-Sea Battle strategy. The idea is to have enough US bases and Air Force capabilities peppered throughout the region so that China would be too surrounded to safely attack in the event of a conflict.

“Stealthy American bombers and submarines would knock out China’s long-range surveillance radar and precision missile systems located deep inside the country,” reports the Washington Post.  ”The initial ‘blinding campaign’ would be followed by a larger air and naval assault.”

Not surprisingly, Beijing is none-too-pleased with the fact that Washington is planning contingencies to “battle” China, and militarily encircling China in the Pacific. Imagine the calls for war in Washington if China was backing various Latin American countries with money and weapons and building air and naval bases in the Caribbean with the explicit aim of bombing United States to smithereens.

No, China has not threatened the U.S. with attack. It has not challenged core “U.S. interests.” The Obama administration simply objects to China’s growing economy and military. Such powers are reserved for America, goes the thinking. So, we’ll threaten anyone who challenges that with war.

105 thoughts on “The US Is ‘Encircling China With Military Bases’”