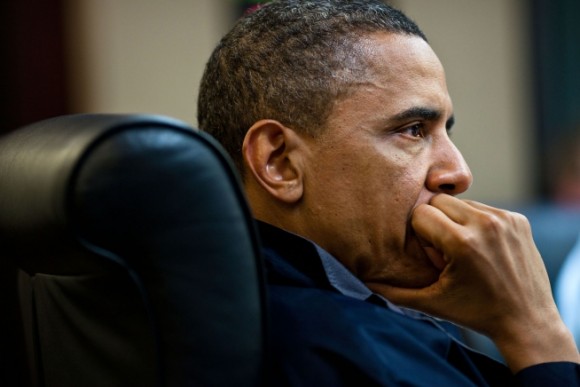 It’s been mentioned that Obama, whether he thinks so or not, is going to need to get Congressional approval before he bombs Syria. It doesn’t look like that’s going to happen, given that administration officials say strikes could come as early as Thursday of this week and Congress is out of session right now.

But Congress being out of session isn’t the only reason Obama doesn’t want to consult Congress, as he is legally obligated. Really, it’s because it looks like Congress might push back on his demands for war.

Despite mounting evidence that President Bashar Assad used chemical weapons on his people, many members of Congress still don’t see a role for the United States military in Syria.

A raft of Republican and Democratic lawmakers — including those directly involved in intelligence oversight — think the U.S. would be wise to take a pass on military intervention in the war-torn country.

“Syria is too far gone to pick sides,” said Rep. Tom Rooney (R-Fla.), a member of the House Intelligence Committee who taught at West Point. “The rebels are infiltrated with Al Qaeda. Assad has joined the ranks of history’s most evil despots in what he’s willing to do to stay in power. And Russia won’t help us find a solution because relations [between Washington and Moscow] are as bad as they have been in 30 years. I don’t see a way forward, but U.S. boots on the ground is out of the question in my opinion.”

Rep. Loretta Sanchez of California, the No. 2 Democrat on the House Armed Services Committee, said that the situation in Syria is “as complicated as it could be” but added that military intervention in Syria could “have unintended consequences that could, in fact, make the situation worse.”

“We should take all necessary steps to support the United Nations inspection efforts and keep a close watch on who has access and who could have access to chemical weapons,” Sanchez said in an emailed statement. “We need to make sure an attack of this nature cannot happen again. Going forward, Congress should be involved in any course of action that the Obama Administration takes.”

…Sen. Tim Kaine (D-Va.) said that “Absent an imminent threat to United States national security, the U.S. should not be engaged in military action without congressional approval.”

It’s not clear if Congressional opposition would be enough to block any executive branch proposal for airstrikes, but it wouldn’t be a rubber stamp, which is what President Obama would want to legitimize his bombing campaign. Short of that, Obama will act unilaterally, and violate the Constitution once again.

On another note, former Carter national security adviser Zbigniew Brzezinski had the following exchange with a German think tank:

Q: Do you think the Obama administration has a strategy or a grander plan for Syria and its aftermath after military action?

Brzezinski: If it does it’s a very well-kept secret.