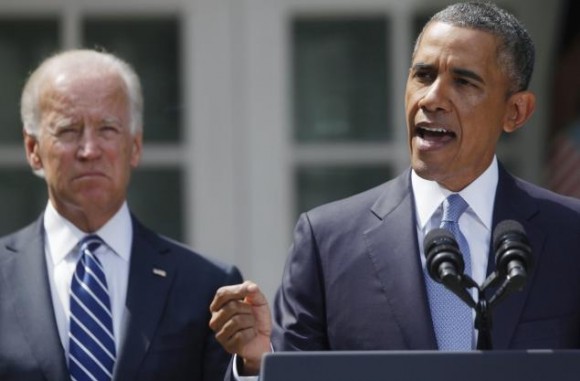 From the very beginning of the Obama administration’s call for war in Syria to punish the Assad regime for allegedly using chemical weapons, the point of American hypocrisy has been made and made again. As U.S. officials gasp at chemical weapons use in Syria and cite it as a pretext for intervention, they fail to come to grips with the fact that the U.S. supported Saddam Hussein’s Iraq as it unleashed chemical weapons attacks on tens of thousands of Iranians in the 1980s. They fail to mention that thousands of Iraqis are still suffering from the effects of chemical warfare from when the U.S. used depleted uranium and white phosphorous in its 2004 assault on Fallujah.

The insincerity is palpable, as always in U.S. foreign policy.

Reason‘s Matt Welch has a must-read addition to laying bare this hypocrisy up at Hit & Run. He gets into the weeds of the “international norm” against chemical weapons that the Obama administration insists must be enforced in Syria with American bombs. Welch goes through three pieces of international law concerning the use of chemical weapons and pulls the rug out from under the administration’s case for war.

There are 138—not 189—nations that have signed the treaty, including Syria. In fact, Syria signed it seven years before the United States got around to ratifying the agreement in 1975, and even then Uncle Sam inserted the caveat that it believes this particular international norm “ceases to be binding as to the use of chemical weapons in regards to any enemy state which does not observe the prohibitions of the protocol.” That is to say, if those bastards chemical us, we reserve the right to chemical them right back.

2) The 1993 Chemical Weapons Convention, or Convention on the Prohibition of the Development, Production, Stockpiling and Use of Chemical Weapons and on their Destruction. This is the relevant treaty signed by 189 states. Unhelpfully for the Syria interventionists, Syria isn’t one of them.

The CWC prohibits “the Development, Production, Stockpiling and Use of Chemical Weapons,” and mandates their destruction. All signatories were supposed to have destroyed their chemical stocks by April 2012, but as of December 2011 the eradication program had only hit 72 percent. One of the biggest scofflaws was also one of the two biggest possessors of chemical weapons: The United States of America, which as of the end of 2011 had destroyed 89.71 percent of its hoard.

So what’s the CWC’s enforcement regime? As even pro-war commentators will note (if they are honest), there isn’t one. Richard Price, author of The Chemical Weapons Taboo, pointed out recently in Foreign Affairs that “Like the Geneva Protocol, the Chemical Weapons Convention does not explicitly stipulate its own enforcement mechanisms.”

Instead of bombing campaigns from America or anyone else, violators of the treaty are subject to war crimes prosecutions at the International Criminal Court (ICC) in The Hague. And—mostly because of lobbying efforts from the United States—the ICC cannot go after dictators that do not recognize the court’s legitimacy. Prosecutions of rogue actors must be referred to the ICC by the United Nations Security Council.

It’s worth pointing out another wrinkle regarding the ’93 Chemical Weapons Convention: Obama administration officials repeatedly point out that Syria is one of only eight countries in the world that is not party to the convention. Interestingly enough, they leave out the fact that both Israel and Egypt, the two biggest recipients of U.S. support in the Middle East, have refused to ratify the convention as well. Both countries have large stockpiles of chemical weapons, but have escaped U.S. criticism on the issue even as Congress imposed harsh sanctions on Syria way back in 2003, partly on the grounds that it had not yet ratified the convention, long before any allegations that the Assad regime used chemical weapons.

3) The 1998 Rome Statute of the International Criminal Court, which willed the ICC into being. The 122 countries that have ratified this treaty recognize the authority of the court to bring trials against people living within these countries who stand accused of genocide, war crimes, and crimes against humanity. The only time residents of non-signatory countries like Syria—or the United States—can be hauled in is at the request of the UN Security Council.

As the ICC’s Wikipedia page succinctly notes, “During the negotiations that led to the Rome Statute, a large number of states argued that the Court should be allowed to exercise universal jurisdiction. However, this proposal was defeated due in large part to opposition from the United States.” Assad might have been charged already had it not been for American diplomatic resistance to a more aggressive court.

Washington’s relationship with the ICC can best be described as contentious and inconsistent, with Republicans especially under the Bush administration demanding all kinds of safeguards and exemptions against Americans ever being subject to international prosecution.

Suffice it to say that if the U.S. practiced the merest consistency in its application of international law and the use of chemical weapons specifically, the case of Syria would be easier to solve. A multilateral agreement to a WMD-free zone in the Middle East would have been a real possibility if the U.S. hadn’t repeatedly threatened a veto at the UN Security Council, beholden to Israel and its massive stockpiles of chemical, biological, and nuclear weapons.

If the U.S. government submitted itself to prosecution for war crimes through the ICC, perhaps Assad would have been hauled before the court long ago. Of course, in that case  President Obama would hesitate bombing Syria without UN Security Council approval, a war crime punishable through a trial at the ICC. After the international crimes of the Bush administration, which included illegal wars, worldwide torture regimes, and countless breaches of the Geneva Convention, nobody in Washington wants to even think about ceding America to the international legal regime.

As Richard Price writes in Foreign Affairs, “One could forgive the cynic for pointing out that, despite all the focus on the alleged perils of violating the legal regime governing the use of force, those rules have been frequently transgressed; the reality is that the United States has been the chief violator in a crowded field of abusers.” [emphasis added].