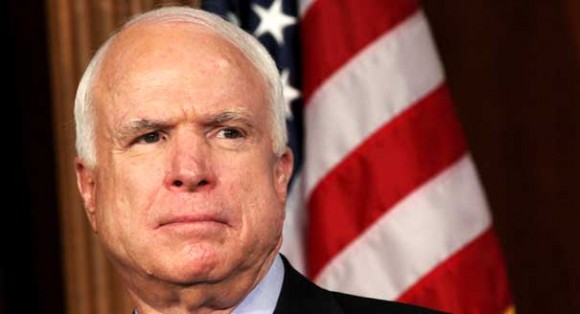 One of the most frequently uttered fictions coming from Syria hawks is the claim that the Assad regime has slaughtered 100,000 Syrians. As Sen. John McCain has repeatedly yelped, “The fact is Bashar Assad has massacred 100,000 people.”

But as Micah Zenko of the Council on Foreign Relations points out, this is a “misleading characterization” that contradicts the very sources interventionists cite for the overall death count.

The most widely quoted source for civil war deaths has been produced by the Syrian Observatory for Human Rights (SOHR), which consists of ahandful of Syrian activists compiling information in a war zone and presenting the best estimates possible. Despite their potential for bias and the methodological challenges of tracking the Syria war, SOHR estimates are consistent with the latest United Nations numbers. In the past 10 days, both the U.N. under-secretary-general for humanitarian affairs,Valerie Amos, and the high commissioner for human rights, Navi Pillay, estimated that “more than 100,000” Syrians have lost their lives in the ongoing civil war.

This is how SOHR breaks down the Syrian deaths:

This grim account is not the Syrian civil war that U.S. policymakers and pundits reference when proposing and debating military intervention options. You will not hear senators assert that Syrian rebels have “massacred” over 45,000 Syrian regime or paramilitary forces.

This is not to excuse the Assad regime’s innumerable war crimes and massacres, but it is important to point out how fallacious statistical references and sweeping exaggerations are employed to help pave the way towards war.

Prior to the Russian proposal to put Syria’s chemical weapons under international control, the Obama administration’s insistence on cruise missile attacks carefully obfuscated on the issue of whether this would be a “humanitarian intervention.” At times, however, the administration and its supporters in Congress did specifically cite the Assad regime’s slaughter of Syrians as a motivating factor to bomb. Incidentally, they failed to mention that most of the reported deaths in Syria’s civil war have not been committed by Assad’s forces.