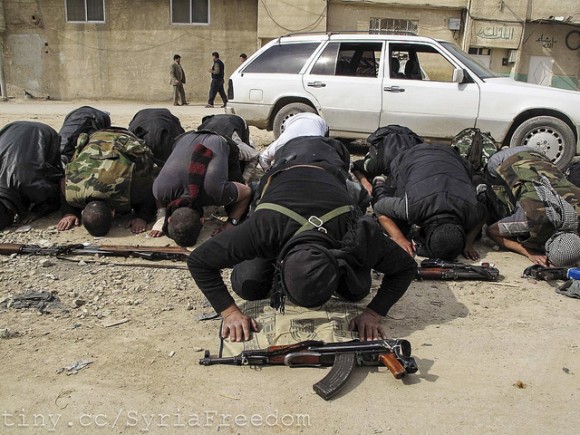 Ideally, the question of whether it’s wise for America to support allegedly “moderate” elements within the Syrian opposition should have been settled when thousands of foreign fighters were reported flooding into Syria for “jihad.” Or maybe when rebels were caught torturing, executing, and mutilating people, and eating their organs. Or maybe when studies showed that half the rebels are Islamists. Or maybe when Obama waived the federal ban on supplying arms to terrorist groups to make way for his Syria policy?

No such luck. But now, if ever, the debate should be over:

“Some of Syria’s most effective rebel forces, including at least three that previously were aligned with the U.S.-backed rebel command, have formed a new alliance with an al Qaida affiliate,” McClatchy reports.

Read that again. U.S.-backed Syrian rebels have joined with al-Qaeda.

“About a dozen fighting groups,” according to McClatchy, including U.S.-backed “moderate” factions like “Liwa al Tawheed, Liwa al Islam and Suqor al Sham,” joined jihadist al-Qaeda affiliates like Jabhat al-Nusra. In their announcement, they “specifically rejected the Syrian Opposition Coalition, the civilian group headquartered in Turkey that the Obama administration has promoted as an alternative to Assad.”

This brings back memories of when, in December 2012, more than 100 Syrian rebel factions signed a petition expressing solidarity with Jabhat al-Nusra and denouncing the U.S. decision to officially designate the al-Qaeda-linked group a terrorist organization.

I’m also reminded of when Secretary of State John Kerry, in the midst of a propaganda crusade justifying war on Syria earlier this month, told Congress that the Syrian “opposition has increasingly become more defined by its moderation” and “its adherence to some, you know, democratic process” and a “broad-based and secular” future.

Days later, Reuters reported that Kerry’s statements were “at odds with estimates by U.S. and European intelligence sources and nongovernmental experts.” In other words, a lie.

The debate over whether and how to support Syria’s “moderate opposition” should have been over long ago. For some reason, I don’t expect this latest news to stick a fork in the debate.