The New York Times is hosting a “Room for Debate” forum on the question of whether al Shabab poses a direct threat to the U.S. 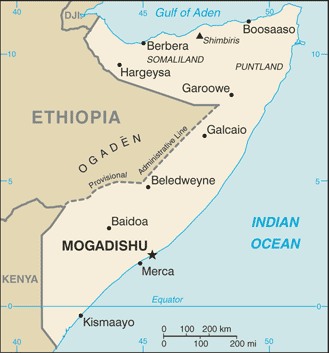 Seth G. Jones of the RAND Corp is one of the commentators and employs some funny reasoning. Citing a University of Maryland database, Jones explained that, “Since 2007, 85 percent of Al Shabab’s attacks have taken place in Somalia, with another 12 percent in Kenya,” so “there is little evidence that Al Shabab is plotting attacks against the U.S. homeland.” But…they could or might…so we should still view them as a threat.

As I’ve written, the inflated threats experts continue to identify in Somalia are a real danger because they could serve to justify even more U.S. meddling in East Africa than has already been occurring. And that is one way to exponentially increase the prospects of al Shabab hitting the U.S.

Jones cites al Shabab’s formal alliance with al-Qaeda as one reason to fear it, but as Bronwyn Bruton, deputy director of the Atlantic Council’s Africa Center, warned last month, “it was al-Qaeda’s goal in Somalia to attempt to draw the U.S. into yet another quagmire,” just as we saw in Afghanistan. And that could still be the goal.

Bruton is another commentator in the Times‘ “Room for Debate” and argues al Shabab is mainly a local problem. “The Somali clan factions in Al Shabab that are opposing the government in Mogadishu do not pose a threat to the U.S. homeland or to U.S. interests in East Africa.” She warns against conflating al-Qaeda and al Shabab factions.

Ken Menkhaus has an even firmer view, arguing that “the actual risk of a terrorist attack by Al Shabab on a soft target in the U.S. remains very low, and should not be a cause for alarm.”

Indeed. Harvard Professor Stephen Walt last week described the “breathless language” in the media that “exaggerates the actual danger” posed by al Shabab. Parodying what he saw in the press, he wrote, “For Americans to be 100 percent safe on American soil, the U.S. government has to get more deeply involved in the local politics and national security problems of this troubled East African region — using the FBI, CIA, special operations forces, drones, whatever — in order to root out bad guys wherever they might be.”

Even if al Shabab did pose a threat to the U.S., which it doesn’t, it seems pretty clear that getting more involved militarily wouldn’t be a way to resolve it. As Jeremy Scahill argues, “U.S. policy has strengthened the hand of the very groups it purports to oppose and inadvertently aided the rise of militant groups, including the Shabab.”