Back when the Egyptian military ousted the country’s first democratically elected president, Mohamad Morsi, the Obama administration deflected calls to cut off aid, as is required by law in the event of a military coup. And as the months passed and the military regime imposed emergency law, censored the media, and marginalized opposition political parties, President Obama steadfastly refused to cut off U.S. support for tyranny in Egypt. 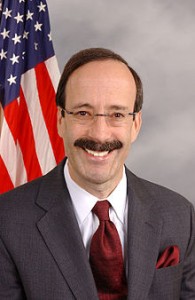 Now, I don’t know what prompted the president to finally cut of some of the military aid to Egypt (the White House said resumption of aid is “pending credible progress toward an inclusive, democratically elected civilian government”), but I know his most vocal detractors in Congress are full of you-know-what.

Rep. Eliot Engel (D-NY) made headlines yesterday when he spoke out against his own party’s leader and criticized Obama for partially halting aid.

“I am disappointed that the Administration is planning to partially suspend military aid to Egypt,” Engel said. “During this fragile period we should be rebuilding partnerships in Egypt that enhance our bilateral relationship, not undermining them.”

Beyond being saddened by not “enhancing our bilateral relationship” with a brutal military regime, what is upsetting Rep. Engel so much? He elaborates:

That, ladies and gentleman, is what we like to call…bullshit. Engel couldn’t care less about the president’s lack of consultation with Congress on Libya, the drone war, covert special operations raids all over the world, or any of the other issues unconstitutionally holed up solely in the executive branch.

So why is Engel so perturbed? A quick look at his top campaign contributors is revealing: Engel’s fifth highest contributions come from what opensecrets.org calls “Pro-Israel” groups (not to mention defense corporations, too). Engel is a strong supporter of Israel, having advocated recognizing Jerusalem as the undivided capital of Israel, and he is in the “Israel Allies” Caucus in Congress.

Of course Engel wants the question of aid to Egypt left to Congress, because he knows Congress would vote to keep it flowing. As John Hudson at Foreign Policy wrote yesterday, “efforts to suspend aid in Congress by libertarian Republicans have failed in the face of bipartisan opposition by congressional leaders and lobbying efforts by the influential American Israel Public Affairs Committee (AIPAC).”

The U.S. supports all kinds of nasty dictators in the Middle East for all sorts of geo-political reasons. But aid to Egypt lost much of its realpolitik value when Mubarak was ousted. Keeping it flowing would be almost solely for Israel’s sake. And those crying about Obama’s partial suspension of Egypt aid should just be honest about that.

16 thoughts on “Why Is Rep. Eliot Engel So Upset About Suspending Egypt Aid?”