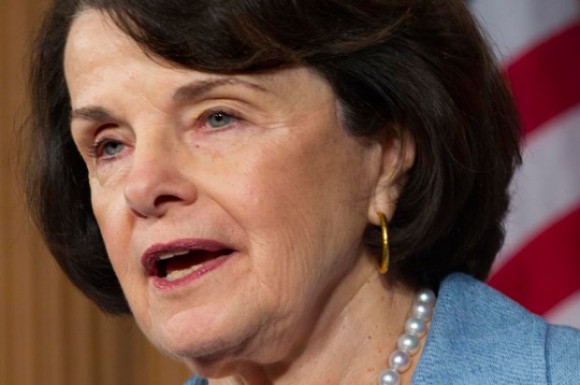 Perpetual NSA cheerleader Sen. Dianne Feinstein (D-CA) published an op-ed in the Wall Street Journal on Sunday arguing that if we had had the NSA spying program prior to the 9/11 attacks, “we would have detected the impending attack that killed 3,000 Americans.” Therefore, systematic violations of the Fourth Amendment as a matter of policy is justified.

Feinstein’s primary piece of evidence for this argument is that NSA Director Keith Alexander says so. The problem is that NSA Director Alexander says a lot of things that aren’t true. Back in June, he claimed that NSA’s bulk collection of call records and Internet activity disrupted 54 “terror plots.” Early this month, the Senate Judiciary Committee got Alexander to admit that this claim was wrong and misleading.

Sens. Ron Wyden (D-OR) and Mark Udall (D-CO) said the NSA dragnet call data program, which is what most people are up in arms about, “played little or no role” in the disruption of these terrorist plots.

So far, there is only one case that government has cited to justify the vast surveillance both at home and abroad. And no, it by no means foiled a second 9/11. The case is that of Basaaly Moalin, a Somali immigrant who was living in San Diego when he decided to send al-Shabab $8,500. Somehow, the surveillance programs narrowed the search for Moalin, who could have easily been caught through more traditional law enforcement procedures.

As Yochai Benkler explained at the Guardian, “this single successful prosecution, under a vague criminal statute, which stopped a few thousand dollars from reaching one side in a local conflict in the Horn of Africa, is the sole success story for the NSA bulk domestic surveillance program.” If you ask me, this doesn’t count as an argument in favor of these NSA programs.

The Cato Institute’s Julian Sanchez writes today that Feinstein’s argument “is simply an attempt to exploit the tragedy of 9/11 to deflect criticism of massive domestic surveillance that would not have been any use in preventing that attack.”

I think it’s safe to say Dianne Feinstein is engaging in hyperbole…or, to put it less generously, dishonesty. The NSA is under more scrutiny now than it has ever been, and they can’t come up with a single example of its utility (never mind legality). The failure to come up with evidence of the programs’ utility itself provides the answer to the question: NSA surveillance doesn’t keep Americans safe from terrorists, period.

25 thoughts on “No, NSA Surveillance Wouldn’t Have Prevented 9/11 And It Hasn’t Foiled a Single Terror Plot”