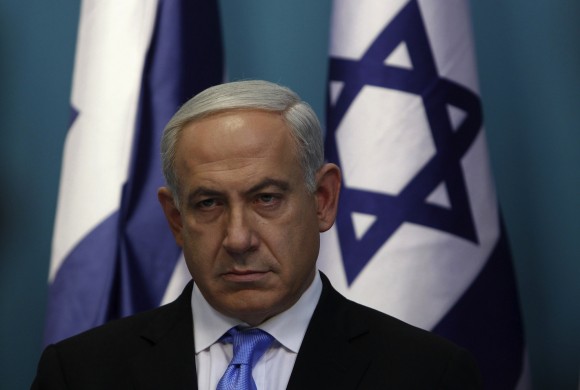 In an interview early this month, Israeli Prime Minister Benjamin Netanyahu said illegal Jewish settlements in occupied Palestinian territory are a “bogus issue” that “don’t stand in the way” of a peaceful solution to the conflict.

That was exactly wrong, especially considering that direct negotiations had been stalled for years because the Palestinian side had freezing settlement construction as a precondition to talks. But it’s interesting to see what Israel has been up to in the meantime:

New settlement construction starts rose by 70 percent in the first half of 2013 compared with a year earlier, an Israeli NGO said Thursday, describing the increase as “drastic”.

According to figures released by the anti-settler group Peace Now, the construction of 1,708 new homes in the West Bank and East Jerusalem began between January and June 2013, compared with 995 in the same period last year.

Billing the figures as a “drastic rise,” Peace Now said 44 percent of the new construction had taken place east of Israel’s vast separation barrier which cuts through the West Bank, and 32 percent fell to the west of it.

The number of Jewish settlers that the Israeli government has incentivized to live on Palestinian land has tripled since 1993 to more than 342,000 at the end of 2011, the Associated Press reported last year. That number does not include some 200,000 Jews living in East Jerusalem, which Israel annexed from the Palestinians in 1967. Updated settler population estimates for 2013 aren’t available, to my knowledge.

To reiterate, all of this settlement building is illegal under international law, which prohibits the forced transfer of civilian populations and forbids military occupiers from transferring any of its population to settle into the occupied area. Yet the demolitions of Palestinian homes and the erection of new Jewish settlements continues.

One might think settlement activity would abate now that Secretary of State John Kerry has apparently got each side back to the negotiating table. But settlement building is a political tactic in addition to a long-term effort to annex the West Bank.

As Yousef Munayyer wrote recently in The New Yorker, ”Everything about the Israeli state’s actual behavior suggests it has no intention of ever leaving the West Bank.” Lara Friedman and Daniel Seidemann, writing in Foreign Policy, call it the “everybody knows fallacy,” namely that Israel’s gradual and continuous expansion onto Palestinian land is premised “on the grounds that ‘everybody knows’ these areas will always be part of Israel.”

If anyone thinks this is lost on the Palestinians, think again.

“We believe that Israel is deliberately sending a message to the US, to the rest of the world that regardless of any attempt at launching negotiations, ‘we are going to press ahead with stealing more land, building more settlements and destroying the two-state-solution,’” PLO executive committee member Hanan Ashrawi told the BBC.

And that’s how this ‘peace process’ is going. The Israeli leadership doesn’t want peace, they want land that doesn’t belong to them. And thanks to support from Washington, they just might get it.