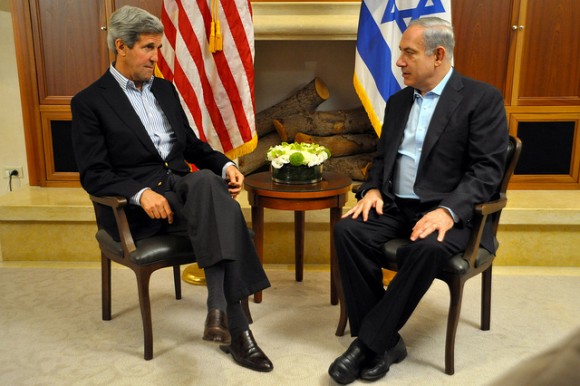 Later this week, Secretary of State John Kerry is going to Israel to follow up on so-called “peace talks.”

“We and the parties remain focused on our goal of achieving a permanent agreement which ends the conflict and all claims, and creates peace between the Israelis and the Palestinians,” the State Department said last week.

Peace eh? Juan Cole provides a round-up of recent Israeli actions to help illustrate how the government of Benjamin Netanyahu understands “peace” with the Palestinians:

Israel just issued tenders for over 1,700 new homes for Israelis on the Palestinian West Bank. The plan will involve demolishing Palestinian residences…

Israel is planning to dig for oil in the Occupied West Bank, in violation of the Oslo Accords and of the laws governing military occupations. Israel is likewise preventing Palestinians in Gaza from developing their offshore natural gas resources.

The government of Prime Minister Binyamin Netanyahu is planning to build a ‘security wall’ along the border of Palestine with Jordan. This infrastructure is designed to secure Israel’s security presence along the Jordanian border, where it has no business being, far into the future, yet again detracting from Palestinian sovereignty.

Israel this week destroyed two “residential buildings in Beit Hanina village and 2 rooms in Jabal al-Mukaber neighbourhood” in East Jerusalem, leaving 33 Palestinian civilians homeless” , adding more displaced to the some 400 who have lost their homes in Palestinian Jerusalem in 2013 alone.

That’s a hell of a lot of peace-makin. Everything listed above quite deliberately undermines the prospects for a viable Palestinian state, which is supposedly what negotiations are based upon.

The only thing on the list that has received any media attention at all is the newest plans for settlement construction, which are illegal. Settlement construction rose by 70 percent in 2013. In the process, Israel destroyed more than 500 Palestinian homes in West Bank and East Jerusalem, displacing 862 people.

Netanyahu’s reaction to the complaints? In a Likud party meeting on Sunday, Bibi said “the Palestinians knew we would build in the course of the negotiations” and they are just seeking to create “an artificial crisis.”

All the U.S. has had to say is that they don’t think settlements “create a positive environment for negotiations.” Never mind them being illegal and never mind the fact that continued U.S. support for Israel is what enables these flagrant violations of international law in the first place.

Everything Israel carries out in occupied Palestinian territory demonstrates clearly that they intend to annex the West Bank and rob Palestinians of what fraction of their own land they still have left.

According to the New Republic, Netanyahu’s Deputy Minister of Defense Danny Danon said of the West Bank “We have rights to the land.”

While all that goes on, the U.S. and Israel continue to utter the word “peace.”