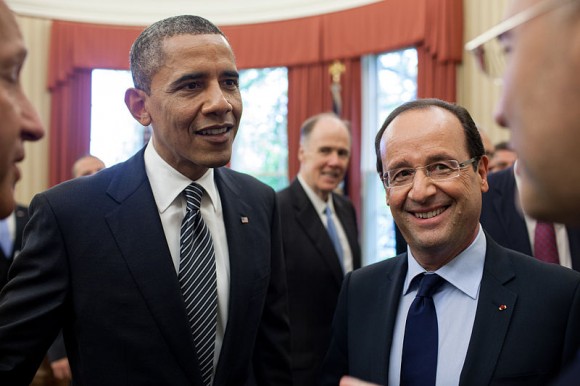 The big news coming out of the Iran negotiations at the end of last week was that France took an unexpectedly rejectionist stance in the talks and refused a deal that was all but agreed upon.

One of the reasons this was a huge deal is that the P5+1 and Iran really did seem to be on the cusp of a first-stage agreement. Secretary of State John Kerry canceled his travel plans and went to Geneva, presumably to be there to announce the historic deal.

Additionally, the negotiations were, quite literally, in a race against time, as hardliners in Congress, Israel, and back in Iran tried to derail any possible deal.

But France, strangely enough, beat them to it. And it may be terribly consequential, running the risk of putting the U.S. back on the war path to Tehran. As Karim Sadjadpour, an Iran expert at the Carnegie Endowment for International Peace, told FP, “if months from now diplomacy has fallen apart and conflict appears more likely, the French could go down in infamy.”

This earned France some unlikely admirers in the two most militant figures in the U.S. Senate: Lindsey Graham told CNN “Thank God for France,” and John McCain tweeted the following.

#France had the courage to prevent a bad nuclear agreement with #Iran. Vive la France!

So why did France do this? It’s hard to say with any certainty, given the fact that the talks are held in complete secrecy. But here are a few of the ideas floating around:

Saudi Arabia has been frustrated at the Obama administration’s reluctance to topple the Syrian regime of Bashar al-Assad, either by bombing or by more direct support for the rebels. And both the Saudis and the Israelis hate the fact that diplomacy between the U.S. and Iran has begun in earnest. An easing of tensions between the U.S. and Iran is viewed by our “allies” as a net loss for their own regional dominance.

France is reported to have dramatically increased its weapons sales to Saudi Arabia, and in August the two signed a $1.34 billion defense contract. And President François Hollande is due to visit Israel next week.

It’s incredibly cynical and Machiavellian to think France scuttled a possible deal with Iran just to swoop in and curry favor with America’s dissatisfied allies, but I wouldn’t put it past them. States naturally aim to benefit their own interests at the expense of other states, even allies.

2 q's: Was Fabius borrowing from Talleyrand's playbook at Concert of Europe, playing spoiler to get major role? And did he collude w/ Bibi?

2. Getting back at the U.S. for backing out of Syria war: In recent years, France has been drunk on the “humanitarian intervention” Kool-Aid. They were one of the driving forces behind NATO’s intervention in Libya and they’ve been much more inclined to direct military intervention in Syria than Washington. Colum Lynch and Yochi Dreazen report in FP that there may be “an element of personal pique in the French position.”

In September, when the Obama administration began publicly threatening military strikes against the government of Syrian President Bashar al-Assad after his regime used chemical weapons against his own people, France was the only American ally that promised to take part. Hollande told Le Monde at the time that the chemical weapons attack outside Damascus “must not go unpunished” and that France was “prepared to punish” Assad for the incident.

That made it all the more embarrassing for the French leader when Obama quickly dropped his plans for an American military intervention into Syria and instead cut a chemical weapons deal with the Syrian strongman. The White House move left France isolated when it didn’t want to be. France is alone again, but this time it’s very much by choice.

3. The French are hawks now: Hollande is supposedly a socialist, but his foreign policy has taken a sharp rightward turn. Since his election, France has been decidedly pro-military intervention on Libya, Mali, and Syria. Apparently, they want to be hawkish on Iran now too. French Foreign Minister Laurent Fabius said he backed out of the impending deal last week because the West hadn’t demanded that Iran stop construction on the Arak heavy water reactor, which may produce plutonium in the future.

To add an even stranger mix to all this, Secretary Kerry has refused to criticize France and even claimed the failure to get a deal on Friday was Iran’s fault, a narrative that runs contrary to every other story leaked out of the meetings.

Parties are expected to meet again to hash out a deal later this month. But if this delay provides enough time for Congress to slap on additional sanctions or for hardliners in Iran to call off negotiations, France will shoulder the blame for potentially setting the U.S. and Iran back on the war path.

48 thoughts on “Why Did France Torpedo the Iran Negotiations?”