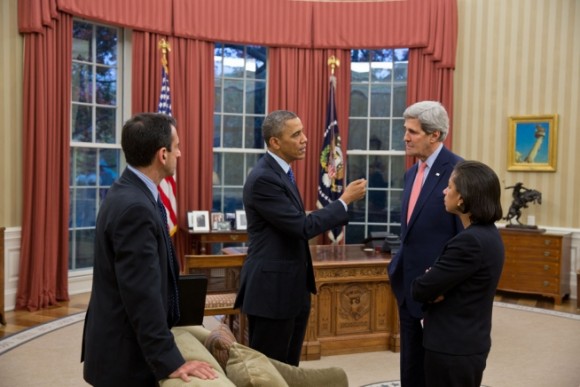 The Obama administration’s fumbling policy on Syria turned out better than it might have this past fall when unprecedented public and international opposition to a punitive U.S. strike against the Assad regime staved off another reckless U.S. war in the Middle East. The Obama administration was embarrassed and one-upped by Russia’s diplomatic solution, and that’s much better than war.

But if that weren’t proof enough of how clueless and capricious the U.S. approach to Syria is, the New York Times now reports that the Obama administration could end up fumbling on Syria in the other direction. “Some analysts and American officials,” the Times reports, are arguing for U.S. military action against the al-Qaeda militants in the Syrian opposition, despite the fact that it “would pose formidable political, military and legal obstacles.”

The concerns are based in part on messages relayed this year by Ayman al-Zawahri, Al Qaeda’s overall leader, indicating that he views Syria — where the number of jihadist rebels and foreign fighters is steadily rising — as a promising staging ground.

Some analysts and American officials say the chaos there could force the Obama administration to take a more active role to stave off potential threats among the opposition groups fighting against the government of President Bashar al-Assad. But striking at jihadist groups in Syria would pose formidable political, military and legal obstacles, and could come at the cost of some kind of accommodation — even if only temporary or tactical — with Mr. Assad’s brutal but secular government, analysts say.

“We need to start talking to the Assad regime again” about counterterrorism and other issues of shared concern, said Ryan C. Crocker, a veteran diplomat who has served in Syria, Iraq and Afghanistan. “It will have to be done very, very quietly. But bad as Assad is, he is not as bad as the jihadis who would take over in his absence.”

Emphasis added. I tend to agree with Ryan Crocker there, but not if it means Washington is going to start cooperating with the Assad regime to quell Islamic militants in Syria. Short-sighted interventionism in Syria on the part of the U.S. and its allies helped lead to the situation we have now, so it is folly to think U.S. meddling in the other direction is going to have desirable effects.

We don’t want a U.S. war in Syria to topple the Assad regime. But we also don’t want another extended war – overt or covert – in yet another Muslim country that tries to bomb al-Qaeda out of existence. Lessons from Pakistan and Yemen demonstrate how poorly that can work.

There have been hints of this shift in the past. Back in March, the Obama administration ordered increased CIA support for Iraqi state militias to fight al-Qaeda affiliates there and cut off the flow of fighters pouring into Syria. And under the same logic, Obama even considered cooperating with the Maliki government in a drone war along Iraq’s border with Syria.

And staving off a collapse of the Assad regime for fear of providing haven for al-Qaeda has long been a concern in Washington. The Wall Street Journal reported this past summer that the CIA’s second-in-command, Michael Morrell, said in an interview that the top threat to U.S. security is “the risk is that the Syrian government, which possesses chemical and other advanced weapons, collapses and the country becomes al Qaeda’s new haven.” Former CIA analyst Paul Pillar echoed the sentiment: “In the short term probably the best outcome in that respect would be prompt re-establishment of control by the Assad regime.”

What is the best answer for a complicated case like Syria? It’s still to stay the hell out of it.

27 thoughts on “Is Obama Changing Tack on Syria?”