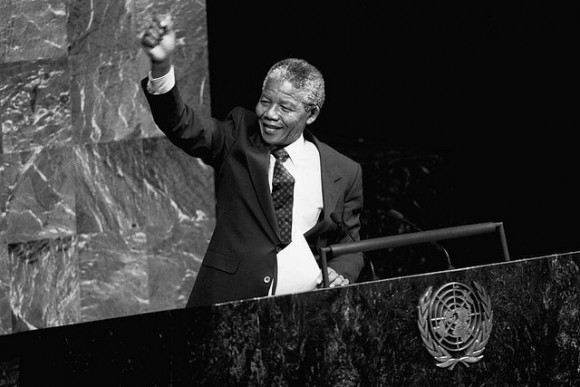 Today you can watch much of the world praise the life and mourn the death of former South African President anti-apartheid leader Nelson Mandela. Scores of U.S. leaders and political pundits with platforms to reach millions of Americans are expressing admiration for Mandela today, but I have barely seen a single acknowledgement of the fact that the U.S. strongly opposed Mandela’s struggle and strongly supported the white supremacist apartheid system in South Africa. There has been almost no mention in the mainstream that Mandela remained on the U.S.’s terrorism watch list until 2008. Mandela spent 27 years in prison, thanks in part to the CIA assisting the apartheid regime’s secret police in his arrest.

This white-washing mostly occurs on television. Cable news is especially vapid. There are a few exceptions in print/digital media. One comes from Peter Beinhart:

In the 1980s, Ronald Reagan placed Mandela’s African National Congress on America’s official list of “terrorist” groups. In 1985, then-Congressman Dick Cheney voted againsta resolution urging that he be released from jail. In 2004, after Mandela criticized the Iraq War, an article in National Review said his “vicious anti-Americanism and support for Saddam Hussein should come as no surprise, given his longstanding dedication to communism and praise for terrorists.” As late as 2008, the ANC remained on America’s terrorism watch list, thus requiring the 89-year-old Mandela to receive a special waiver from the secretary of State to visit the U.S.

…In South Africa, for decades, American presidents backed apartheid in the name of anti-communism. Indeed, the language of the Cold War proved so morally corrupting that in 1981, Reagan, without irony, called South Africa’s monstrous regime “essential to the free world.”

Believe it or not, there is an aspect of this hypocritical praise of Mandela that is mentioned even less than the media coverage of his passing. That is the uncomfortable similarity that Israel’s occupation of Palestine now has with the apartheid regime in South Africa.

The Times of Israel reported last February that Alon Liel, a former Israeli Foreign Ministry director-general and ex-ambassador to South Africa, believes Israel currently qualifies as an apartheid state. “In the situation that exists today, until a Palestinian state is created, we are actually one state. This joint state — in the hope that the status quo is temporary — is an apartheid state,” Liel said in Jerusalem.

Israel’s plan for military occupation of the West Bank and ongoing settlement construction for Israeli-only areas, was compared to South African apartheid by former Israeli Prime Minister Ariel Sharon himself, who actually used the word “bantustan” to describe the separating of Palestinians into cantons.

Here is a Haaretz piece from 2003 reporting on Sharon’s reference of the Bantustans:

Sharon’s map is surprisingly similar to the plan for protectorates in South Africa in the early 1960s. Even the number of cantons is the same – 10 in the West Bank (and one more in Gaza). Dr. Alon Liel, a former Israeli ambassador to South Africa, notes that the South Africans only managed to create four of their 10 planned Bantustans.

The Bantustan model, says Liel, was the ugliest of all the tricks used to perpetuate the apartheid regime in most of South Africa’s territory.

So the hypocrisy on Mandela isn’t just a case of an ugly past that we’ve now learned from (and erased). Rather, that kind of hypocrisy in U.S. foreign policy is still going on today. One wonders how much of that history will be erased when Israeli apartheid becomes as universally opposed as South African apartheid.

49 thoughts on “The Hypocrisy on Mandela is Palpable”