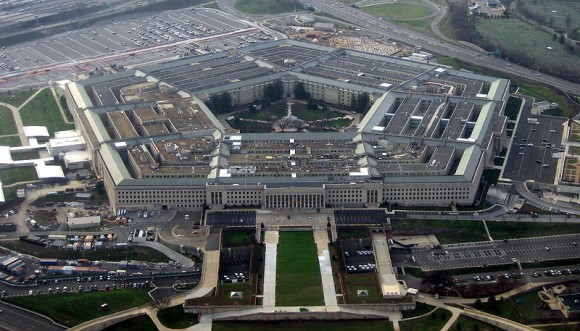 As anyone exposed to a whiff of news media knows, Republicans and Democrats are more divided than ever. They just can’t come together like they used to, goes the cliché.

But this week, they did come together. Republican Paul Ryan and Democrat Patty Murray hashed out a budget deal to avoid automatic sequestration cuts. It was a genuine “compromise,” as the Daily Show’s Jon Stewart quipped.

As has been widely reported, the real motivator in this “compromise” was the supposedly “dire” cuts in defense spending. There have been vociferous warnings from Congress and the Pentagon that sequestration will weaken America by taking an ax to national defense and leaving us vulnerable to attack.

Obviously that’s nonsense. The U.S. could cut its defense budget in half, unthinkably more drastic than sequestration, and still outspend China, which is the U.S.’s next highest spending competitor.

As a 2011 report from the Center for Strategic and Budgetary Assessments found, while the source of growth in annual defense budgets since 2001 has been mostly (54%) due to the wars in Iraq and Afghanistan, much of the rest has been spent on wasteful superfluous weapons technology, bloated salaries and benefits plans, and expensive peacetime operating costs for the 900-plus military bases in 130-plus countries around the world.

The deal, brokered with Senate budget chair Patty Murray, increases federal spending by $45 billion, doesn’t touch Medicare or Social Security and forces Americans to pay more to be felt-up and naked-scanned by the TSA. And all to prop up the already-bloated budget of the Department of Defense, which gets half of that additional spending.

Luckily, to deal with the shortfall the Pentagon could easily cut around $70 billion from the budget over 10 years simply by getting rid of waste, without threatening any Army brigade combat teams, Navy combat ships or Air Force fighter squadrons. For immediate relief, the Pentagon could save the $23 billion it wasted in 2013 overusing contractors and underusing oversight according to one senior defense official.

Before the budget deal, some critics of defense spending had been ready to accept sequestration as the blunt, imperfect tool that might force the military to shed some of the bulk it acquired while fighting two of the longest and most expensive wars in our history. Even with the sequester in place, the Pentagon’s base budget was set to remain well above pre-9/11 levels for the next decade, and the military would have taken a far smaller haircut than it did after Vietnam and the Cold War wound down.

…”These ‘terrible’ cuts would return us to historically high levels of spending,” snapped Winslow Wheeler of theProject on Government Oversight. According to Lawrence J. Korb, a senior fellow at the Center for American Progress, the Pentagon could reduce its budget by $100 billion a year without undermining its readiness. The sequestration cuts for 2013 amounted to $37 billion.

It’s worth noting that House representatives probably felt more pressure from corporate defense lobbyists than from the top military brass. Pentagon officials regularly testify to Congress that billions of dollars here and billions of dollars there are being wasted on things that they don’t want or need. Congress typically ignores this budgetary advice from the generals because defense corporations give extraordinary amounts of money to political campaigns and strategically set up factories in politically tactical districts in order to scare elected officials away from cutting the defense budget for fear of an uptick in unemployment.

The lesson here is that the intransigent partisanship that has saddled Congress with political deadlock quickly becomes an ephemeral trifle once their corporate welfare queens urge them to come together to take more money from taxpayers and give it to the people who make war.