Former Israeli Prime Minister Ariel Sharon died over the weekend. Much of the U.S. and Israeli media have whitewashed Sharon’s legacy, erasing from history the fact that he was a wretched war criminal who was devoted to a Greater Israel and to massacring any civilians he perceived as obstructing that goal.

Those who have at least mentioned some of his failings make note of the 1982 massacre of at least 800 Palestinian civilians in the Sabra and Shatila refugee camps in Lebanon. Sharon, defense minister at the time, deceptively persuaded the Israeli cabinet that an invasion of Lebanon was necessary, the goals being to destroy the Palestinian Liberation Organization and to install the Maronite Christian Phalange Party into power in Beruit to serve as a client state of Israel.

The war of choice Israel waged in Lebanon killed tens of thousands of people, mostly civilians. Exact numbers are difficult to verify because of the “the haste with which bodies were buried in mass graves and the absence of impartial agencies.” The destruction of the war helped exacerbate a civil conflict in Lebanon that led to even more casualties. That alone is a legacy that should strip Sharon of his post-mortem label of “a man of peace.”

The Sabra and Shatila massacre took place when the Israeli-backed Lebanese Christian militia slaughtered men, women, and children in the Palestinian refugee camps, which were located in areas controlled by the Israeli military. Eye witnesses said the Lebanese militia fighters were in constant contact with the Israeli military over walkie-talkies. 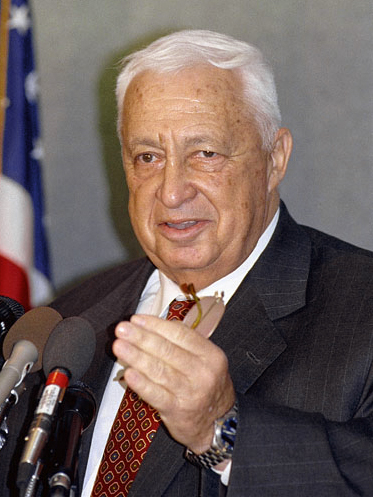 Sharon was removed from office after an Israeli commission concluded that Israeli leaders were “indirectly responsible” for the massacres and that Sharon bore “personal responsibility” for failing to prevent them. But, as Human Rights Watch said on the day of Sharon’s death, “Ariel Sharon died without facing justice for his role in the massacres…[which] constituted war crimes and crimes against humanity.”

Not only was Israel responsible for the slaughter of innocents, but the U.S. was at least indirectly blameworthy. “Working with only partial knowledge of the reality on the ground,” wrote Seth Anziska in a 2012 New York Times op-ed that made use of declassified documents, “the United States feebly yielded to false arguments and stalling tactics that allowed a massacre in progress to proceed.”

Anziska’s piece is worth quoting at length:

In Washington that same day, Under Secretary of State Lawrence S. Eagleburger told the Israeli ambassador, Moshe Arens, that “Israel’s credibility has been severely damaged” and that “we appear to some to be the victim of deliberate deception by Israel.” He demanded that Israel withdraw from West Beirut immediately.

In Tel Aviv, [American envoy to the Middle East, Morris] Draper and the American ambassador, Samuel W. Lewis, met with top Israeli officials. Contrary to Prime Minister Begin’s earlier assurances, Defense Minister Sharon said the occupation of West Beirut was justified because there were “2,000 to 3,000 terrorists who remained there.” Mr. Draper disputed this claim; having coordinated the August evacuation, he knew the number was minuscule. Mr. Draper said he was horrified to hear that Mr. Sharon was considering allowing the Phalange militia into West Beirut. Even the I.D.F. chief of staff, Rafael Eitan, acknowledged to the Americans that he feared “a relentless slaughter.”

…Mr. Draper opened the meeting by demanding that the I.D.F. pull back right away. Mr. Sharon exploded, “I just don’t understand, what are you looking for? Do you want the terrorists to stay? Are you afraid that somebody will think that you were in collusion with us? Deny it. We denied it.” Mr. Draper, unmoved, kept pushing for definitive signs of a withdrawal. Mr. Sharon, who knew Phalange forces had already entered the camps, cynically told him, “Nothing will happen. Maybe some more terrorists will be killed. That will be to the benefit of all of us.” Mr. Shamir and Mr. Sharon finally agreed to gradually withdraw once the Lebanese Army started entering the city — but they insisted on waiting 48 hours (until the end of Rosh Hashana, which started that evening).

Continuing his plea for some sign of an Israeli withdrawal, Mr. Draper warned that critics would say, “Sure, the I.D.F. is going to stay in West Beirut and they will let the Lebanese go and kill the Palestinians in the camps.”

Mr. Draper responded: “We are not interested in saving any of these people.” Mr. Sharon declared: “If you don’t want the Lebanese to kill them, we will kill them.”

Mr. Draper then caught himself, and backtracked. He reminded the Israelis that the United States had painstakingly facilitated the P.L.O. exit from Beirut “so it wouldn’t be necessary for you to come in.” He added, “You should have stayed out.”

Mr. Sharon exploded again: “When it comes to our security, we have never asked. We will never ask. When it comes to existence and security, it is our own responsibility and we will never give it to anybody to decide for us.” The meeting ended with an agreement to coordinate withdrawal plans after Rosh Hashana.

By allowing the argument to proceed on Mr. Sharon’s terms, Mr. Draper effectively gave Israel cover to let the Phalange fighters remain in the camps. Fuller details of the massacre began to emerge on Sept. 18, when a young American diplomat, Ryan C. Crocker, visited the gruesome scene and reported back to Washington.

Years later, Mr. Draper called the massacre “obscene.” And in an oral history recorded a few years before his death in 2005, he remembered telling Mr. Sharon: “You should be ashamed. The situation is absolutely appalling. They’re killing children! You have the field completely under your control and are therefore responsible for that area.”

On Sept. 18, Reagan pronounced his “outrage and revulsion over the murders.” He said the United States had opposed Israel’s invasion of Beirut, both because “we believed it wrong in principle and for fear that it would provoke further fighting.” Secretary of State George P. Shultz later admitted that “we are partially responsible” because “we took the Israelis and the Lebanese at their word.” He summoned Ambassador Arens. “When you take military control over a city, you’re responsible for what happens,” he told him. “Now we have a massacre.”

This case is worth reflecting on, not only because it is an illustration of how easily Israeli leaders like Ariel Sharon can get away with crimes against humanity, but because it is a microcosm of how the U.S.-Israeli relationship often works. The reality of Washington’s political and ideological commitment to Israel allows Israeli leaders to continuously deceive, pressure, and obligate the U.S. to be supportive of war crimes and to bankroll Israel’s strategic noncommittal to an actual peace deal with the Palestinians.