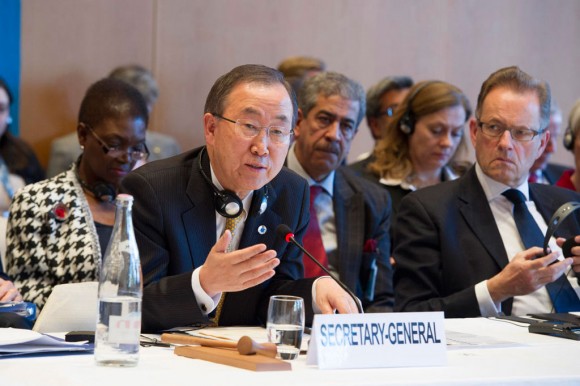 The Geneva II talks on the Syrian civil war in Switzerland started today. In the lead up to the conference, the media focus, unfortunately, had been on which parts of the Syrian opposition would attend and whether or not Iran, the Assad regime’s close ally, would attend (the U.S. pressured the UN to uninvite Iran at the last minute for not accepting the Geneva Communique).

And today, the media focused on two developments: (1) Secretary of State John Kerry’s hardline rhetoric about the Syrian regime’s crimes and how Assad cannot be a part of any transition government, and (2) the tense back-and-forth between UN Secretary General Ban Ki-Moon and Syrian Foreign Minister Walid al-Moualem, the latter being nothing more than a disagreement over how much time the foreign minister should have to speak.

From where I’m sitting, the real story of the Geneva II conference was all but ignored. It was summed up by Ban Ki-Moon in a press conference following the talks when he said, “all of the countries who have been providing arms to either side must stop and encourage them to engage in political dialogue.”

This opinion, which Moon has repeatedly expressed, echoes that of countless other experts. Back in 2012, UN rights chief Navi Pillay condemned the continued flow of weapons from foreign powers to both sides in the Syrian conflict. “The ongoing provision of arms to the Syrian government and to its opponents feeds additional violence,” she said in the text of remarks made to the Security Council.

James Dobbins, director of the RAND a former US assistant secretary of state told NPR recently, “the external environment in which sides are providing arms to both of the contending parties—all of that suggests that the situation’s going to continue to deteriorate.”

When both sides to a civil war are emboldened by their foreign benefactors, neither feels vulnerable enough to compromise. This virtually ensures perpetual stalemate.

“A continuous supply of weapons to both sides—whether from Russia, Iran or the Gulf States—only maintains the parties’ perception that fighting is a better option than negotiating,” Dr. Florence Gaub, a researcher at the NATO Defense College, wrote at the Carnegie Endowment for International Peace last year. “This explains why, in terms of statistical probability, an external supply of weapons lengthens a civil war.”

The U.S. has grown more and more trepidatious about the Syrian opposition. Some rebels are getting training and weapons from the U.S., but it is by no means significant (many U.S. officials have even said an Assad victory would be better than al-Qaeda-linked rebels grabbing hold the reins of state). But U.S. allies, particularly in the Arab Gulf states, do continue to aid extremist militants in Syria. Iran and Russia, wary of U.S. (or U.S.-allied) gains in Syria, continue to fully back the Assad regime. Some political will, and a minimal amount of honesty (which we didn’t get from Kerry), could put a stop to this and help mitigate the conflict considerably.

17 thoughts on “The Real Story at Geneva II: Foreign Meddling in Syria ‘Must Stop’”