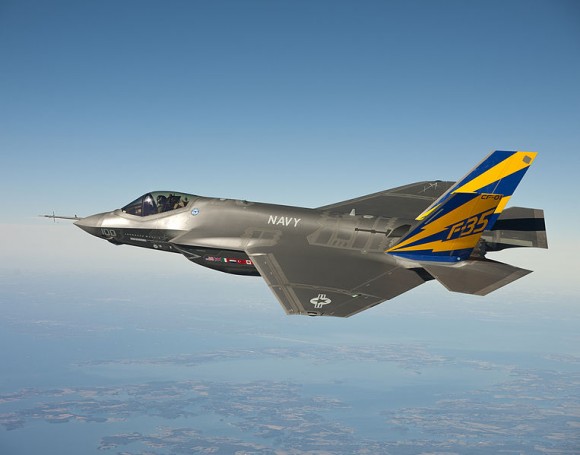 One of the hard truths about Washington is that Congress recklessly wastes billions of taxpayer dollars on weapons programs that the Pentagon says it doesn’t want or need. Congress does this to avoid the slight uptick in unemployment in their districts that might result from cutting portions of the defense budget.

In other words, defense corporations that get virtually all their revenue from government extort continued welfare payments because they employ people in states and districts across the country. Politicians put their own political careers ahead of doing what is right and sensible (i.e., cutting wasteful DoD programs).

Part of this is achieved through lobbying. These corrupt politicians get tens of thousands in campaign contributions to incentivize them against cutting off Lockheed Martin’s welfare benefits. But another part of their strategy goes beyond lobbying; they lie.

According to a new report by William Hartung of the Center for International Policy (via Veronique de Rugy), Lockheed Martin dramatically inflated the number of estimated jobs that would be lost due to cuts to the notoriously expensive and wasteful F-35 fighter jet program.

“Lockheed Martin claims that the 125,000 jobs created by the F-35” would be lost if the government cuts funding. But only 32,500 of those are directly related to the F-35 program. A more generous estimate from a University of Massachusetts study “would put total jobs generated by the F-35 program in the range of 50,000 to 60,000 jobs, or less than half the 125,000 jobs claimed by Lockheed Martin.”

So Lockheed Martin was warning elected officials of dire unemployment predictions if the F-35 was cut, but the estimates were exaggerated in a big way. And this isn’t a new tactic.

A study put together during the recent sequestration debate that was “commissioned by a top defense and aerospace trade association” – namely, the Aerospace Industries Association and the International Association of Machinists and Aerospace Workers – found that “a new batch of planned Pentagon spending cuts would cause 1 million jobs to be lost next year.”

The National Association of Manufacturers, another lobby group, repeated this finding, adding that proposed cuts would “increase unemployment by 0.7 percent, and decrease gross domestic product by almost 1 percent.”

But, as Lawrence Korb, Senior Fellow at the Center for American Progress wrote at the time, these lobby groups fibbed their numbers.

“To maximize their findings (and their political impact),” Korb writes, ”both studies assessed the effects of defense sequestration on every sector of the economy that could be hit by “induced effects,’ including secondary and tertiary effects like reduced consumer spending. As a result, the ’1 million jobs’ figure includes jobs in industries as distant from defense as ‘retail trade’ and ‘leisure and hospitality services.’”

And besides, Korb points out, “defense spending is not a jobs program.” At least, it’s not supposed to be.

As far as the health of the economy is concerned, defense budgets are a net drain. The jobs that these rent-seeking defense corporations maintain only show what big business can do with taxed and diverted wealth.