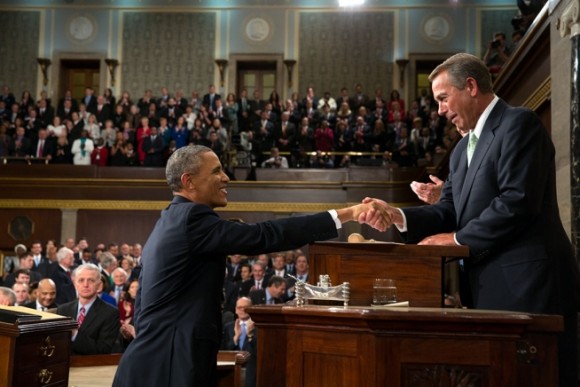 Despite Obama’s promise in last week’s State of the Union address that he will veto any bill that heaps additional sanctions on Iran while the interim agreement is still in place, hawks in the House of Representatives are still pushing for it.

Indeed, a mixture of hawkish Republicans and Democrats in Congress are aligned with AIPAC and Israeli Prime Minister Benjamin Netanyahu in their belief that the interim deal reached with Iran in the P5+1 talks in Geneva is tantamount to appeasement and will inevitably lead to a nuclear-armed Iran.

The Washington Post‘s Jennifer Rubin is criticizing the Obama administration for not wanting to preventively bomb Iran. Richard Grenell at Fox News argues the interim agreement is too favorable to Iran, “allowing the Islamic Republic to forego full and verified suspension before negotiations even begin.”

President Obama and his team caved further to the Iranians by agreeing to a deal that rewarded sanctions relief and other benefits without getting any actions from Iran first.

In trusting the Iranians to stop their secret enrichment activities and come clean to the IAEA inspectors at a later date, Obama shows his naivety.

I suppose I was the naive one, considering I actually believed such obviously false statements couldn’t possibly be published at FoxNews.com.

The argument that Iran got sanctions relief without any curbs on its nuclear program is so baseless as to be laughable. Jessica Tuchman Matthews of the Carnegie Endowment for International Peace explains:

Iran agreed to eliminate its existing stockpile of 20 percent enriched uranium either by diluting it down to low enrichment or converting it to an oxide form that is not adaptable for further enrichment. Netanyahu had famously held up a cartoon poster of a bomb before the General Assembly with a red line drawn across it at the threshold level of 90 percent enriched uranium. The agreement takes Iran’s less enriched stockpile to zero.

The terms also provide that Iran can build no additional centrifuges except to replace broken ones. While existing centrifuges may continue to spin, the product must be converted to oxide so that Iran’s stock of low-enriched uranium does not grow. The agreement bans the testing or production of fuel and new components for Arak and requires Iran to turn over important design information that will help theIAEA safeguard the reactor there.

To strengthen the assurance that all this will happen, the agreement requires daily access for inspectors as well as downloads from cameras used for surveillance, including at the Fordow underground enrichment plant. To reduce the possibility that Iran could be running covert, hidden fuel cycles, it extends monitoring for the first time to uranium mines and mills and to centrifuge production and assembly facilities. These inspections are unprecedented in both frequency and extent.

To oppose the deal on this ground, one would have to be able to explain why Rouhani, if his intention were to cheat, would sign a deal that focuses the world’s attention on Iran’s nuclear behavior and imposes unprecedented inspections and monitoring. What would be the logic in that? Iran has inched forward successfully for years. Why invite severe retribution by making an explicit deal with the world’s major powers and then violating it?

Some good questions, that hawks at the Post and Fox News can’t seem to answer. Neither can they answer how imposing additional sanctions won’t put the U.S. back on the war path to Tehran. And if it’s war they want, they can’t seem to understand that bombing Iran’s enrichment facilities is the one surefire way to persuade every single Iranian that a nuclear weapon is their only viable deterrent.

20 thoughts on “The Mindlessness of Iran Hawks”