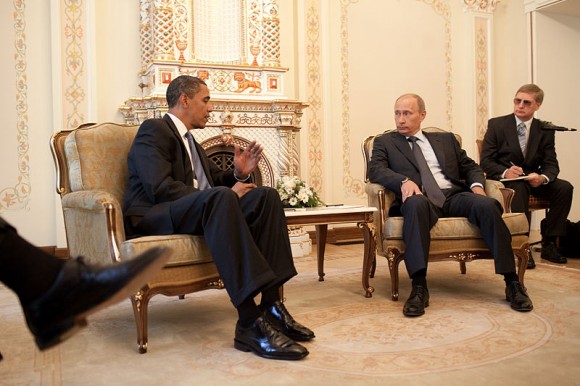 The international debate over what is happening in Ukraine is a partisan one. Some criticize Russia for nefariously seeking to keep Ukraine in its orbit. These folks denounce the Ukrainian government and security forces for their corruption and violence against protesters. Others accuse the West – the U.S. and the European Union – of meddling in internal Ukrainian affairs. These folks condemn the violent thugs in the street hurling rocks and starting fires.

Both partisan groups seem to be blind to the truth of their opposite counterparts. Partisans for Russia are blind to the fact that Russia is trying to keep Ukraine in its orbit, while partisans for the West refuse to see that Washington, et al. also see influence over Ukraine as a zero-sum realpolitik competition with Russia. Furthermore, the justification for both Russian and American interests in Ukraine seem to exist only because the other power is vying for influence, instead of some kind of vital interest in Ukraine in and of itself.

As an example, take former UN Ambassador John Bolton, a raving lunatic when it comes to foreign policy, if you ask me. He has been howling for weeks about Russian attempts to “reestablish hegemony over Ukraine,” arguing further that if Russia is successful, “the fate of the other Soviet republics won’t be far behind.” He even describes this as a “great power rivalry with Russia,” even while he is apparently blind to the fact that he is advocating the U.S. to adopt the same, or an even more aggressive, approach.

It’s worth reiterating how this snowball started. Masha Lipman at the New Yorker:

Until late last year, Yanukovych was negotiating an association agreement with Europe, but then he abruptly changed his mind. Loans from European and international organizations were available only with strings attached, dependent on the implementation of reforms that mandated more transparency and thus were bound to weaken Yanukovych’s grip on power. In the meantime, Russia was threatening to make things very hard for Ukraine if it opted for a rapprochement with the European Union—and those threats were very real. Putin was promising fifteen billion dollars on the condition that Ukraine stay away from Europe. Yanukovych opted for Russia, and this caused the first wave of street protests…

So yes, this is a case of both powers competing for influence and, in the meantime, letting the Ukraine unravel. As for the U.S., we know Washington has been working largely behind the scenes to, as Jacob Heilbrunn wrote at The National Interest, “install a [Ukrainian] government that it regards as appropriate.”

As I said, this kind of meddling – along with Obama’s very public denunciations of Yanukovych’s government – might be good for great power jockeying but it is tearing the Ukraine apart. Here is James Carden, a former advisor to the US-Russia Bilateral Presidential Commission at the State Department from 2011-2012:

Over the past three or four weeks, every time the Yanukovych regime has made concessions and some kind of truce was in the offing, the radical oppositionists stepped up the violence thereby leaving the regime little choice but to respond. What the opposition knows is what we now all know thanks to our incredibly indiscreet Assistant Secretary of State Victoria Nuland; namely that the United States backs and is actively working towards the goal of supplanting Ukraine’s democratically elected president.

The magnitude of Ms. Nuland’s slip up is gradually becoming clearer and clearer. One can hardly blame the radical opposition for keeping up the pressure; after all, they have definitive proof that the United States government shares their goals. So why settle? The violence they are perpetuating has its logic; and so the crisis continues unabated.

Great power competition has been the undoing of many a weaker country caught in the middle. Even Henry Kissinger, an architect of the near total destruction of Vietnam for what every U.S. official at the time described as a vital U.S. interest, has admitted that it was largely about irrational fears of the plans of America’s great power rivals.

“Americans found it difficult to accept that a medium-sized developing nation could cultivate such a fierce commitment only for its own parochial causes,” Kissinger wrote in On China. “Hence they interpreted Vietnamese actions as symbols of a deeper design. Hanoi’s combativeness was treated as a vanguard of a Sino-Soviet coordinated conspiracy to dominate at least Asia.”

“The assessment was wrong on both grounds,” Kissinger adds. “Hanoi was not any other country’s proxy. It fought for its vision of independence…”

The lesson is obvious: to craft interventionist policies on the grounds that U.S. indifference will be some other nation’s gain is dangerous and futile. In short, stay the hell out of other people’s business.

17 thoughts on “Interventionism in Ukraine: The Destructive Logic of Great Power Competition”