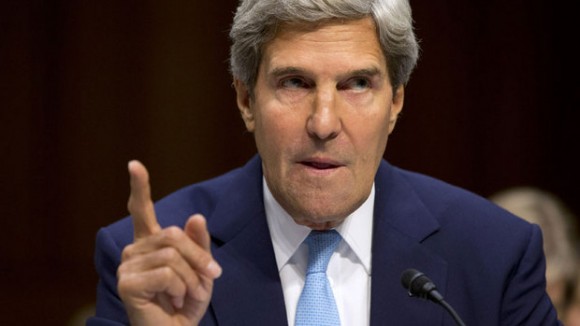 U.S. Secretary of State John Kerry decried what he called a “new isolationism” in the United States on Wednesday and suggested that the country was beginning to behave like a poor nation.

Speaking to reporters, Kerry inveighed against what he sees as a tendency within the United States to retreat from the world even as he defended the Obama administration’s diplomatic efforts from Syria to the Israeli-Palestinian conflict.

[Secretary of State John Kerry]…presented an emotional defense of the Obama administration’s engagement in international crises in the face of widespread European and Middle Eastern criticism that the United States was retreating from a leadership role.

Speaking here at the Munich Security Conference, the most important trans-Atlantic security gathering, Secretary of State John Kerry expressed some exasperation with the criticism, rejecting “this narrative which frankly has been pushed by some people who have an interest in trying to suggest that the U.S. is somehow on a different track.” He went through a litany of American involvement in places like Afghanistan, Libya and the Middle East, saying, “I can’t think of a place in the world where we’re retreating.”

At the beginning of this month, John Kerry vehemently dismissed the criticism that America is “retreating” from the world. Not even four weeks later, he is making that very criticism. He was right the first time. Like the John Kerry of February 1st, I can’t think of one single place in the world where the United States is withdrawing.

I could go on. I didn’t even mention the ongoing war in Afghanistan, the support of the Iraqi dictatorship putting the country on a path to civil war, Iran, etc. etc. No, unicorns don’t exist, the Earth isn’t flat, and the U.S. is not “in retreat.”

65 thoughts on “Kerry Was Right the First Time: America Is Not ‘Retreating’ Into ‘Isolationism’”