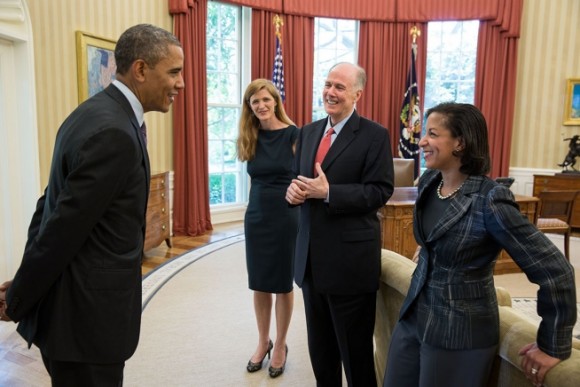 Three years ago, the UN approved NATO action in Libya to impose a no-fly zone and head off an allegedly imminent bloodbath perpetrated by the Gadhafi regime. Days before this third anniversary, the Libyan parliament basically impeached the Prime Minister following the government’s inability to do anything about armed groups in the east taking control of oil resources. There is veritable power vacuum in the country that continues to generate instability there and throughout the region.

Notably, the US-led NATO action in Libya immediately violated the parameters of the UN Resolution, when the pretense of imposing a no-fly zone quickly manifested into a regime change operation. Clever legal advisers in the Obama administration then made the ridiculous claim that U.S. military action did not count as “hostilities” and thus did not need Congressional approval, as required by the the Constitution and the War Powers Act. The intervention was legally dubious from the beginning.

But how about the practical effects of the intervention? Was it successful? The Republican Party’s manic obsession with the Obama administration’s fumbling in the days following the raid on the State Department’s Benghazi compound has obscured any real debate about the wisdom of the overall intervention. But taking a look at the facts on the ground, it seems eminently clear the consequences of the intervention have gone from bad to worse.

First among the problems is the power vacuum which has emboldened armed militias, some with ties to terrorist groups. The resulting chaos led to the instability in Mali and continues to disrupt the region.

“The Middle East and North Africa has long been a region flooded with large amounts of weapons and military assistance, usually state-to-state transfers,” says Brian Katulis, who served on the UN’s panel of experts on Libya. “The difference now in Libya and the regional spillover effects is that fragmentation inside of the country is reflected in disorganized weapons outflows driven largely by non-state actors. In a very real sense, Libya is exporting its insecurity to surrounding countries.”

The UN panel of experts released a report that Katulis says “paints a troubling picture of the insecurity inside of Libya and the widespread spillover effects it is having.” Some key findings:

And what about the argument that at least we prevented a bloodbath? That doesn’t pass the smell test. For one thing, the New York Times may be summed it up fairly when it reported last week that political killings plague post-Gadhafi Libya. Gene Healy makes an important additional point on this:

As political scientist Alan J. Kuperman pointed out at the time, Obama “grossly exaggerated the humanitarian threat to justify military action in Libya.”

Kuperman explained in another article, Moammar Gadhafi “did not perpetrate a ‘bloodbath’ in any of the cities that his forces recaptured from rebels prior to NATO intervention … so there was virtually no risk of such an outcome if he had been permitted to recapture the last rebel stronghold of Benghazi.” Meanwhile, wrote Kuperman, “[b]y intervening, NATO enabled the rebels to resume their attack, which prolonged the war for another seven months and caused at least 7,000 more deaths.”

In the run-up to the war, George Will asked a pointed question: “Would not U.S. intervention in Libya encourage other restive peoples to expect U.S. military assistance?”

“Perhaps it would,” Will’s Washington Post colleague Jackson Diehl replied a week later, shortly before the bombing began. “Would that be a disaster?”

It seems it was. As Kuperman observed, “NATO’s intervention on behalf of Libya’s rebels also encouraged Syria’s formerly peaceful protesters to switch to violence in mid-2011, in hopes of attracting a similar intervention. The resulting escalation in Syria magnified that country’s killing rate by tenfold.”

There was virtually no legal basis for what the U.S. ended up doing in Libya. There ended up being no net benefit for Libyans or for U.S. interests as defined by Washington. It was a failure and its consequences continue to haunt us.

Invariably, however, the lesson Americans and future political actors in Washington will take from all this will be to continue to intervene militarily wherever we want and never consider whether it’s legal and simultaneously disregard the potential untended consequences.

11 thoughts on “The Libya Intervention Was an Illegal Failure. Thus: Hooray for Intervention!”