Over at PolicyMic, Eileen Shim cites a recent report from Reporters Without Borders that names the U.S. in its annual “Enemies of the Internet” list:

Reporters Without Borders did not name entire governments on its list, but rather focused on the individual agencies that censor the Internet. Last year’s revelations regarding the National Security Agency (NSA)’s spying schemes have landed the U.S. on the list for the first time.NSA whistleblower Edward Snowden’s leaks regarding the Government Communications Headquarters (GCHQ) have also introduced the U.K. agency to the list for the same reasons.

“The NSA and GCHQ have spied on the communications of millions of citizens including many journalists. They have knowingly introduced security flaws into devices and software used to transmit requests on the Internet. And they have hacked into the very heart of the Internet using programmes such as the NSA’s Quantam Insert and GCHQ’s Tempora. The Internet was a collective resource that the NSA and GCHQ turned into a weapon in the service of special interests, in the process flouting freedom of information, freedom of expression and the right to privacy,” the report said.

It added that the NSA and GCHQ’s surveillance operations were all the more troubling because they were located in “democracies that have traditionally claimed to respect fundamental freedoms”; because these tactics have been so effective for the U.S. and the U.K., “they will be used and indeed are already being used by authoritarians countries such as Iran, China, Turkmenistan, Saudi Arabia and Bahrain to justify their own violations of freedom of information.”

Here’s the map illustrating the “Enemies” list (on their site, it is interactive): 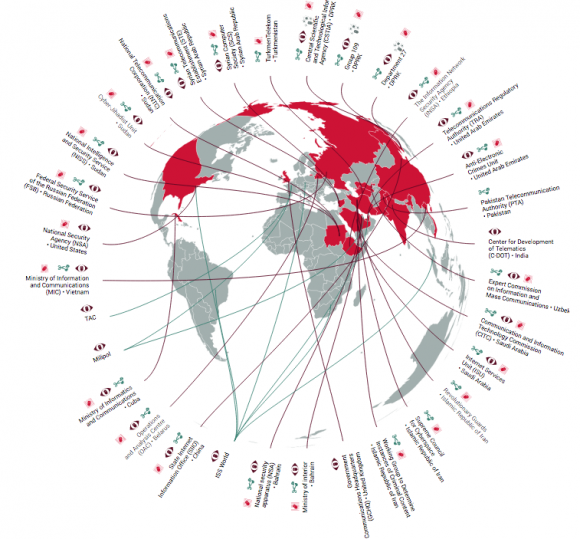 The United States also made headlines upon the release of Reporters Without Borders’ other well-known list, the World Press Freedom Index, because it slipped 13 places in the ranking to 46.

The First Amendment prohibits Congress from making any laws that abridge “the freedom of  speech, or of the press.” The Fourth Amendment commands that the people’s right to privacy “against unreasonable searches and seizures, shall not be violated,” and that no warrants to rifle through our shit shall issue without probably cause of specificity. Meanwhile, the government is virtually criminalizing journalism at the margins and using the Internet to destroy our privacy.

How much longer can Americans repeat their masturbatory mantras about “the land of the free” when our government’s rankings for critical things like press and Internet freedoms continue to plummet?

7 thoughts on “US Makes ‘Enemies of the Internet’ List”