In the New York Times, Ben Macintyre reviews the new book by Richard Overy The Bombers and the Bombed. Macintyre gives a summary of Overy’s myth-busting about the Allied bombing of Germany. Indiscriminate bombing of civilians, instead of sticking to military targets, is usually defended as (1) a response to similarly indiscriminate bombing campaigns by the Germans, like in the Blitz, and (2) the only way to completely bring down the Nazi regime. 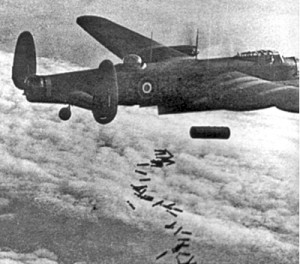 “Overy demonstrates, however, that the tactic of bombing urban areas had been put into action by the British before the Blitz,” Macintyre reports. And as for the second justification:

[T]hough the devastation left ordinary Germans demoralized, exhausted and frightened, the bombs did not provoke internal collapse or social implosion; the German people were not bombed into revolution. In the cruellest irony, the hardship and terror may even have solidified the Nazis’ grip on the populace: “The effect of the bombing was not, in the end, as the Allies hoped, to drive a wedge between people and regime, but the opposite, to increase dependence on the state and the party.”

Of course, this is by no means to say that the Allies were in the wrong while Nazi Germany was somehow better behaved. WWII was a massive conglomeration of evil acts of mass murder on all sides, and Nazi Germany was the epitome of that evil. But there is a valuable lesson in reviewing Allied war policy critically in this fashion.

The staying power of Allied propaganda has proven remarkably durable. Most people nowadays think back to WWI and frame it as a needless conflagration in which millions were used as cannon fodder for the small-minded and narrow self-interests of competing European states. Very little moral compulsion remains attached to the war effort on any side in that conflict.

WWII, however, is different. Most people still consider the Allied war effort a saintly battle for the freedom of the world. Political and military leaders of the time are still revered as heroes. Purging Europe of Nazis and fascists was, uncontroversially, a welcome result. But this shouldn’t delude us into framing the conflict as a purely Manichean, good vs. evil dichotomy, as it is so often framed in the public.

As U.S. General Curtis LeMay, commander of the Tokyo fire bombing operation, admitted, there were war criminals on all sides. “I suppose if I had lost the war, I would have been tried as a war criminal,” he said. “Fortunately, we were on the winning side.”

If Overy’s scholarship on this is right, and the two main moral and strategic justifications for Allied indiscriminate bombing of civilians don’t hold up to scrutiny, it may represent the beginnings of a broader understanding of WWII that is closer to the one we have about WWI, or closer to LeMay’s characterization. And that is for the better.