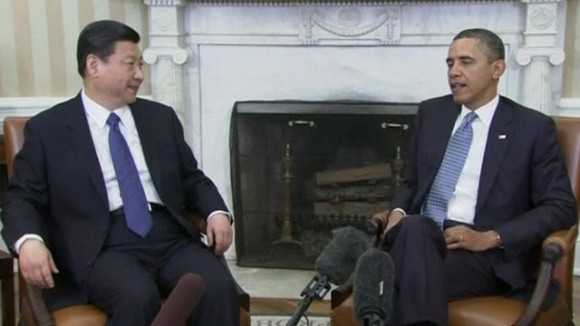 In a post titled “US Warns China: Don’t Pull a Crimea,” The American Interest notes the Obama administration’s efforts to maintain a credible military threat as a bulwark against China’s disputed maritime and territorial claims in the South China Sea:

The U.S. Assistant Secretary of State for East Asia issued a stern warning to Beijing yesterday: Don’t even think about using force to annex islands in the South China Sea, as Russia did in Crimea.

“The prospect of the kind of incremental retaliatory steps that are gradually being imposed on Russia in terms of its banks, in terms of cronies and other areas should have a chilling effect on anyone in China who might contemplate the Crimea annexation as a model,” Daniel Russel said. ”The net effect is to put more pressure on China to demonstrate that it remains committed to the peaceful resolution of the problems.”

“The president of the United States and the Obama administration is firmly committed to honoring our defense commitments to our allies,” he continued.

China has been paying attention to the West’s response Russia, which has so far included nothing more than anemic sanctions and the categorical ruling-out of the military option.

It is very unlikely that China is drawing actionable lessons from Russia’s annexation of Crimea. Just as Washington’s failure to bomb Syria did not influence Putin to take action in Crimea, Washington’s failure to respond militarily in Crimea is not going to convince Beijing that it can annex Taiwan or the Spratly islands. For one thing, the U.S. probably would intervene militarily in the East or South China Seas because Washington has formal defense treaties with Japan, South Korea, and the Philippines and remains the guarantor of the status quo in Taiwan. Washington had no such arrangements with Ukraine. Beijing knows this.

That said, China’s long-term strategy has indeed been to gradually gain more economic, military, and political power while refraining from outright aggressive provocations that upset the status quo. Beijing intends to acquire its expanded claims in a de facto way as its own sphere of influence in East Asia expands and Washington’s contracts. As University of Chicago professor John Mearsheimer noted: “The Chinese are going to imitate the United States. They’re going to try to dominate Asia the way we dominated the Western hemisphere, and they’re going to try to push us out.”

So a war over the Diayou/Senkaku islands is unlikely to happen in the near term. But as U.S. power declines due to imperial overstretch, the influence over questions like Taiwan or these disputed island chains will gradually be ceded to China. That can either happen peacefully, with the U.S. willingly withdrawing from its claims of global hegemony, or violently, with a clash between two nuclear-armed giants.

In other words, the U.S. could easily keep out of costly war (whether hot or cold) with China over hegemony in East Asia. As Jan Hornát wrote recently at The National Interest, “a balance of power system can accentuate mutual differences, intensify rivalries and legitimize expansionist policies and preemptive war in name of the equilibrium.” Ceasing to impose on a region half a world away, on the other hand, can keep these dangerous contingencies remote. Seems like an easy choice to me. But the Obama administration is instead reinforcing its claims of dominance in East Asia and is issuing reassurances that we will continue to surround China militarily and respond with violence to any perceived expansions.