The one idea interventionists have to solve the Syrian conflict is to eliminate the Assad regime. Regime change is the solution to the humanitarian calamity, they reason, because the Assad is the one doing all the killing. As Sen. John McCain has repeatedly yelped, “The fact is Bashar Assad has massacred 100,000 people.”

Actually, he hasn’t. According to SOHR data cited by Micah Zenko and Amelia M. Wolf of the Council on Foreign Relations, “most of the reported deaths in Syria have not been committed by forces under Bashar al-Assad’s command.”

While noting “the potential bias and the methodological challenges” of the data, Zenko and Wolf show that, despite depictions of the Syrian civil war as a regime indiscriminately killing its civilians, “more pro-regime forces than civilians have been killed during the Syrian civil war.” 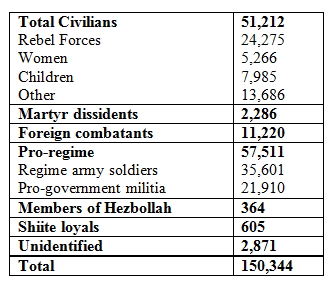 The Syrian civil war is a messy, multi-sided conflict in which civilians have been killed by all sides and in which combatants make up most of the reported deaths. Zenko made this same point back in September, when an earlier data set on the Syrian death count was released. “The types of interventions that proponents have endorsed for Syria…have almost nothing to do with how Syrian non-combatants are actually being killed,” he wrote.

Obviously, this does not excuse the Assad regime’s many war crimes or lessen its evil brutality, which does include killing and torturing civilians. But the indexed estimated death count paints a very different picture of the conflict than the one described by Washington’s most vocal interventionists. A common policy proposal to mitigate the mass suffering in Syria is for the U.S. to help the rebels and undermine the Assad regime, a scheme that just becomes ludicrous after looking at the data.

Update: This post should be absorbed along with the news that Syrian opposition fighters now have U.S.-made anti-tank missiles given to them by Saudi Arabia with Washington’s consent.