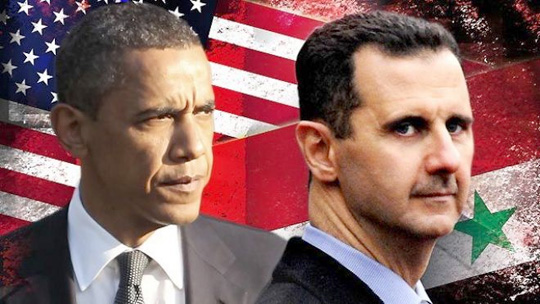 A Washington Post-ABC News poll conducted Sept. 4-7 among 1,001 adults nationwide revealed that 59% of Americans believe ISIS (or ISIL or the Islamic State) is a "very serious threat to US vital interests." Another 31% view ISIS as a "somewhat serious" threat.

I live down the street from the US Capitol. If ISIS struck in the belly of the beast, my family and I would likely be negatively impacted. But I’ve never lost a minute of sleep worrying about it, and I never will. Not because I’m "tough" but because I’m not a pawn of the government controlled media that misleads Americans into accepting Obama’s propaganda to "scare" us into more war.

There’s a better chance that Santa Claus comes down my chimney than there is for "Muslim terrorists" to invade the US.

In tried-and-true fashion, Obama gave his "we will destroy ISIS" speech on the eve of the September 11 anniversary. What better way to push for blind acceptance of yet another war than to conjure up memories of the 9/11 World Trade Center attack?

One wonders how Americans can go along with the "terrorists are a threat to the US" narrative so quickly after the Iraq war debacle but 90% do and believe the brilliantly worded narrative, which brings to mind imagery of falling buildings and smoky skies.

It’s ironic that ISIS, formerly known as al-Qaeda in Iraq, originated in 2004 following the US war on Iraq. And in a further bit of absurdity, ISIS has received arms from the US in Syria while at about the same time the US was bombing them in Iraq.

Weapon manufacturers must be quite pleased over Obama’s new war on ISIS, as any war – no matter the reason or validity – is good for business.

So while the US government makes weapon makers richer, it threatened legal action against the mother of beheaded US journalist James Foley for trying to raise ransom money to free her son from ISIS capture. Maybe Obama needed the imagery of an American journalist being killed by ISIS to justify its new war – Foley’s mother almost got in the way of his plan.

ISIS, which has about 30,000 fighters, according to the CIA, and with no air force, navy, or nuclear weapons, is not a genuine threat to a country that has over 1.4 million soldiers on active duty. But that doesn’t stop the people from feigning fear. It’s like watching a horror film during which you feel scared, but then you realize it’s just a movie. Unfortunately, when it comes to the "Muslim terrorists are a threat to the US" storyline, Americans still haven’t realized it’s just a movie.

So is Obama’s new war on terror a smokescreen with a hidden agenda that he cannot publicize? Is his real target Syrian President Bashar al-Assad and then Iran? How long will it take before some of Obama’s targeted strikes hit a Syrian weapons depot, or a government building?

Syria would become the sixth Muslim country Obama bombs this year, and the seventh in his presidency. Yet people still buy the myth that Obama is a moderate who only uses military force reluctantly. I believe that about as much as I believe that someday ISIS will come into the United States, torch the Constitution and institute Sharia law. Too bad 90% of Americans disagree.

Chris Ernesto is cofounder of St. Pete for Peace, an antiwar organization in St. Petersburg, FL that has been active since 2003. Mr. Ernesto also created and manages OccupyArrests.com and USinAfrica.com.