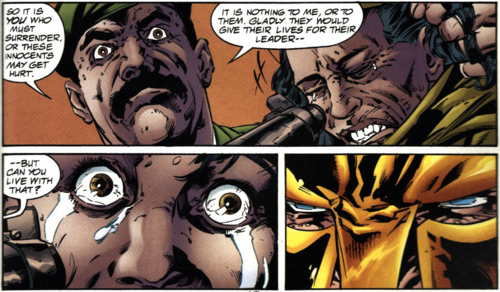 Dictators are bad, therefore intervening to remove a dictator is good, right?

For many Iraq War supporters it was as simple as that, and they derided opponents as apologists for Saddam Hussein. Even now that the War has become a self-evident catastrophe and debacle, dead-enders among its architects still have the nerve to resort to this line. For example, in June of this year, John Bolton whined on television:

President Bush did absolutely the right thing in overthrowing Saddam Hussein, and it’s kind of stunning to me to see you libertarians defending that dictatorship.

One might be tempted to call this a cartoonish, comic-book view. But as it turns out, that would be an unfair insult to comic books, since one particular comic book had a far more sophisticated and accurate perspective on the matter. In fact, it anticipated, in broad outlines, what would actually result from such a war four years before the Iraq War was launched. In the 1999 graphic novel JLA: Superpower (written by John Arcudi and illustrated by Scot Eaton and Ray Kryssing), Superman, Batman, and the other super-heroes of the Justice League of America (JLA) struggle over what to do about “Kirai”, a “rogue” Middle Eastern country clearly based on Iraq.

Initially, Kirai is only on the fringes of the story. For example, a television in the background is shown to announce, “In other news, U.N. weapons inspectors were turned away in Kirai today.” This is probably an echo of then-recent developments. In 1998, the year before the comic was published, President Bill Clinton signed the Iraq Liberation Act, which targeted that country for regime change, prompting Saddam to end cooperation with UN weapons inspectors. (In late 1999, UN inspectors were allowed to return .)

In the main thread of the narrative, the Justice League recruits a powerful young superhero named Mark Antaeus. Antaeus is extremely driven and idealistic. Years prior, due to the limits of his power, he wasn’t able to save a family from the collapse of a burning building. This failure haunted him, leading him to vow, “never again,” and to undergo extreme body modifications to greatly boost his power.

Antaeus thrives in the League, helping it save innocent lives and property from direct threats from super-villains and alien invaders. But then, he visits the Middle East, and helps a U.S. army contingent transport “Vudish” (Kurdish) refugees from Kirai. Afterward, a sergeant pointedly asks why his friend Superman doesn’t just fly into “downtown Bemsal” (Baghdad) and take out “Gosnar Mehtan” (Saddam Hussein). He continues, “We been stuck here in the Gulf for almost seven years now. You guys could end it in a second.”

Deeply affected by this admonishment, and terrified of again failing to help victims in crisis, Antaeus later approaches Superman, saying “I keep thinking about what you said when you asked me to join, about being part of a larger commitment.” Together, they fly to “the southern Kirai province of Vudistan” (Kurdistan), and, like the Ghost of Christmas Present, Antaeus shows Superman a neighborhood of suffering Vudish “Tiny Tims” in a bombed out village, missing limbs, hobbling around on crutches, and roasting rats for food.

Superman asks, “These are Vudish rebels?” Antaeus answers, “They were rebels, seven years ago, when they tried to break free of Kirai during the Gulf Conflict. [This echoes the Kurdish revolts against Saddam surrounding the Iran-Iraq and Persian Gulf Wars.] Seven years! I was still in high school then. It’s long enough for somebody —anybody—to forget this is even happening. But it is. President Mehtan has bombed them, dropped nerve gas on them [an echo of Saddam’s use of chemical weapons against the rebellious Kurds]—and now he’s just starving them all to death. Don’t you see? This is that larger commitment.”

Suitably reproved, Superman organizes a Justice League mission to smuggle food and medicine into Vudistan. Antaeus walks in on a planning meeting, and objects that they should be working on regime change first. Superman answers, “That’s not what the JLA does.”

Antaeus insists, “But they can’t handle this. It’s been going on forever. No-fly zones, embargoes, weapons inspections. We’ve got the power to make a difference. Why not act?”

Batman, sounding like Ron Paul in a cape and cowl, answers: “There are consequences to consider. As outsiders, it would be irresponsible for us to shape the destiny of another country on impulse.”

Unconvinced, Antaeus says, in a mutter that grows into a bellow, “I can’t believe this. I can’t. You’re all just going to sit here and talk, and talk and talk—while people are DYING!!!” He shatters the conference table and then jets off in a rage. Antaeus flies to Kirai, and blasts through its defenses into the dictator’s palace, where he tries to place the Mehtan under arrest. When the dictator threatens local children as hostages and human shields, Antaeus prepares to resort to sterner measures. The Justice League shows up to discover that Antaeus has killed the dictator, and they try to arrest him.

Enraged, Antaeus says, “You won’t come to Kirai to arrest a genocidal monster, but when I stop him, when I do what anybody would have done, suddenly I’m a criminal?!! This is insane.”

Batman retorts, “The situation here is too big to be decided by one man. Who knows the kind of repercussions this is going to have?”

After briefly relenting, a snide remark by Green Lantern sends Antaeus into a rage spiral, in which he takes on the entire League in big super-battle. After Antaeus is cut to the quick by some penetrating words from his idol Superman, he stops fighting and flies away, deeply conflicted.

In the next panel, an array of newspaper headlines reveal the “consequences/repercussions” Batman had tried to warn Antaeus about. Following the death of Mehtan, factional fighting to replace him escalates into a civil war in which thousands die. Many of these headlines contain uncanny anticipations of actual Iraq War consequences, telling of assassinations (of which there have been so many in Iraq since 2003, the subject has its own Wikipedia page), ethnic conflict, the “Kurds” effectively seceding (as they have in real life), other governments in the region aiding factions (like, in real life, the Iranians backing the Shiites, the Israelis backing the Kurds, and Gulf States backing Sunni insurgents in neighboring Syria), fighting in the provinces reaching the capital (just as the ISIS war has marched right up to the gates of Baghdad), and a horrendously bloody civil war in which rival factions vie to replace the fallen dictator (like the post-invasion Shia/Sunni civil war to replace Saddam in power, in which the U.S. fought for the Shia side).

An utterly dejected Antaeus is shown walking through a war-torn city in Kirai, surrounded by the dead and dying. His worst nightmare has come true. Not only has he failed to help victims in need, he has made even more victims. Overwhelmed with remorse, Antaeus ruptures the plutonium stockpile that augments his powers, and flies into the sky where it detonates, killing him. This is one story element in which the real life analogy completely breaks down. Interventionists in the real world are not haunted by conscience enough to even resign and do public penance, much less commit suicide, no matter how many souls they lead to slaughter.

What is the lesson here? Are brutal dictators a necessary fact of life for some countries? No, dictators deserve to lose power. But the movement to deprive a dictator of power must arise organically from the local populace, who have the on-the-ground knowledge, connections, and motivations to liberate themselves and their near-neighbors sustainably, responsibly, and relatively peacefully, such that civil wars are not ignited, and an even worse tyrant does not arise to replace the fallen one.

It is quite something that, in 1999, there was more foreign policy wisdom and prescience to be found in a super-hero comic book, than in any of the white papers coming out of think tanks at the time, like John Bolton’s neocon perch, the Project for the New American Century. If only Bolton and Bush had listened to Batman, who, unlike George W, resolved his daddy issues by fighting evil with justice and restraint, instead of upending and decimating a whole country.

Yet, even the object lesson of Iraq wasn’t enough to teach the Washington foreign policy establishment about “humanitarian” regime change and unintended consequences. Eight years after the start of the Iraq War, Hillary Clinton was crowing, “We came, we saw, he died,” as she exulted over the death of Libyan dictator Moammar Gadhafi, who was knocked from power thanks to U.S. airstrikes. Yet, Libya too descended into chaos, and it is now embroiled in a dozen-sided civil war.

Another interesting parallel is that Susan Rice, one of the key driving forces behind the intervention in Libya, which was ostensibly launched to fend off a phony threat of “genocide,” was allegedly motivated by her own “never again” resolution (like Antaeus’s), which she made following her own “failure to help” in Rwanda. As The Washington Post put it:

“Rwanda’s 1994 genocide was a watershed for Rice. At the time, she was a 30-year-old National Security Council official in the Clinton administration, which stymied international efforts at the United Nations to respond militarily to the slaughter. Rice took the failure to heart.”

“I swore to myself that if I ever faced such a crisis again, I would come down on the side of dramatic action, going down in flames if that was required.”

Of course, it is not her, but Libya that is “going down in flames” thanks to her “dramatic action.”

So that’s twice now, in recent “big headline” memory that the same thing has happened: the U.S. intervenes to knock out a dictator (both secular, by the way), and this is followed by chaos and war (dominated by Islamist elements in both cases, by the way), as the plight of the people only worsens. Surely, the powers-that-be have learned their lesson by now!

Nope. Third time’s the charm, and all that. The next Muslim country the U.S. is turning into a civil-war hellhole is Syria, and the next secular dictator now slated for regime change is that country’s ruler, Bashar al-Assad. Once that’s accomplished, the country will surely descend to an even lower ring of hell, as the Sunni Islamists that the U.S. and its Gulf allies have been supporting run rampant all the way up to the Mediterranean coast, slaughtering non-Sunni “apostates” and Christian “infidels” all along the way, and as various internal factions (Alawites, Shia, Druze, Christians, Kurds, local Sunnis, ISIS, the al Nusra branch of Al Qaeda, other foreign jihadists, etc) and external powers (the U.S., Turkey, Israel) violently contend for local or national power.

Given the Ron Paulian wisdom of Superman and Batman in this comic book, and the folly of today’s “men of power,” the supplication of the 1986 Genesis song “Land of Confusion” is now more appropriate than ever.

Oh Superman where are you now

The men of steel, the men of power

Are losing control by the hour.