The state crackdown on the Catalan drive to vote on their future on October 1st, coincides with what is perhaps Barcelona’s most important festival, that of the Mercé (the Feast of our Lady of Mercy), which signals the traditional end of the summer season.

It is celebrated with the parading of papier maché giants (gegants) through the streets and a breathtaking exhibition of human towers (castellers) in the rather small Saint James Plaza (La Plaça Sant Jaume) in the heart of the old city, where both Barcelona City Hall and the Palace of the Generalitat (The seat of Catalan Government) are located.

If you have never seen an exhibition of castellers (human tower making) you should really go on YouTube and take a look.

Catalans see this practice as being deeply emblematic of who they are as people in that it places enormous emphasis on what they often refer to as their exaggerated bent toward associacionisme, which could be roughly translated as their compulsive need to join together in voluntary civic organizations of a decidedly multi-generational configure to celebrate their culture, and more simply, the art of living together in joy and solidarity.

There are casteller clubs or collas, located all around the country, where people practice all year round to perfect this physically grueling, technically demanding, patience-challenging, and at times, dangerous, form of collective art.

At last reports, all was going smoothly with the Mercé in the face of the enormous pressures being unleashed upon the city by the central government. Indeed, like the stoic and patient castellers they are gathering to watch, the people appear to be reveling in their ability to hold out with grace and smiles on their faces upon their faces in the face of this unwanted outside force from the centralist authoritarians.

As reported yesterday, the Spanish government sent representatives to Barcelona to convince the head of the Catalan police force (Els mossos d’Esquadra) to cede his command to the dictates of the central government. He has refused to do so.

The Spanish constitution has mechanisms for both the suspension of the Catalan Statue of Autonomy and the takeover of the mossos d’esquadra. Both actions, however, would require a vote of the Spanish Parliament.

That, of course, would expose the true intentions of the Rajoy in a way that even the most obtuse and legalistically minded professor of political science could detect.

In the face of this, they have opted for the skilled authoritarian’s preferred weapon of choice: overwhelming coercion by backdoor means. In the case of the Statute of Autonomy, they have simply used the ministry of economy to cult the flow of funds. Anticipating this eventuality, the Catalan government had their own computerized revenue collection system ready to go. In the interest of quelling anxieties among Catalan government workers about being left high and dry, they paid them several days before their usual end of month disbursement period.

And yesterday, when the head of the Mossos Josep Lluis Trapero refused to cede to central government receivership the score was raised to 2-0 in favor of the Catalans.

The most important issue of all is the matter of not ceding to the temptation of engaging in violence. This is what the central government is counting on to justify further repression.

They no doubt have numerous agents provocateurs ready to spring into action. The key will be to let these poor souls do what they may and laugh, which won’t always be easy to do.

Meanwhile in Spain, the foolishness continues abated. The ridiculous article at El País about Putin being behind the goings on in Catalonia, that I addressed yesterday is still getting top billing at the paper.

Also yesterday, there was a meeting of the national committee of Podemos – which for a all of the of presumption goodness and love of liberty projected on them by half-informed progressives around the world has been decidedly cowardly about supporting the Catalan desire to vote – in in Zaragoza, a group of Spanish ultra-nationalist protested surrounded the hall where they were meeting overwhelming the police contingent there to protect them.

The events in Zaragoza followed the decision a Madrid-based judge the week before to prohibit the mayor of Madrid from ceding a publicly owned space for a meeting called by Podemos to discuss and debate the issue of the Catalan vote.

In yet another demonstration of the similarities between the authoritarian mind and poorly milled Soviet heavy machinery of the 1930s, the judge Yusty Bastarreche declared that the get-together to discuss how to precede on the matter was, “in essence” an act in favor of the recently passed “illegal” law of the Catalan parliament to separate themselves form Spain.

I guess it just goes to show that foreign liberals and nationalistic judges and goons both have similar problems when it comes to understanding the true positions of the much hyped and quite slippery Podemos, a group that that says it wants to see the Catalans vote, but that the Catalans should never disobey central government dictates in order to do so.

Finally, El País continues its march toward intellectual oblivion with a column today by a poor fellow named Carlos Yarnoz who uses various Jesuitical turns to attack the current use of the term pueblo by the Catalans in favor of voting on October 1.

He suggests the term “pueblo” is one fraught with ambiguity. This, of course is true, and every scholar of nationhood knows it.

But he then goes on to suggest that this ambiguous usage is the exclusive heritage of right wing movements who are inherently anti-democracy and anti-liberal in nature. Ergo, the Catalans now using the term must themselves be, under all their verbiage about democracy, essentially reactionary in nature.

This is one of the oldest and most enduring saws in the centralist playbook: to call Catalan nationalism a regressive creed being imposed by a regressive elite upon the poor and otherwise progressive Catalan people.

While it is indeed true that the revival of Catalan nationalism that took place at the beginning of the 20th was led in its initial phases by Catholic traditionalist elite, it was always shadowed by a highly progressive vision for the enhancement of local prerogatives.

By the 1930s, the movement’s center of gravity had shifted quite clearly to the left of the political spectrum. It has remained there ever since.

“But what about Jordi Pujol, the center-right politician that ruled the Catalonia uninterruptedly from 1981 to 2003?” they will say.

The answer is simple. Yes, Pujol was from the right side of the Catalan political spectrum, but his rightism was far to the left of his “rightist” counterparts in Spain. Putting aside his personal identification as Catholic, his policies were quite similar to those of the socialists in the rest of Spain, that is, before those socialist completely lost their souls about a decade back.

If your are looking for an American parallel, try this looking at the domestic policies championed by the Republican Richard Nixon and those pursued by the “liberal” Barack Obama. When we look at things coldly across time and space we can see that the much-hated “Tricky Dick” had much dedication to progressive values than did our most recent ex-president.

There has been a gathering of support in Stockholm for the Catalan right to vote.

In a homily delivered at the Monastery of Monstserrat, one of traditional bastions and protects of the Catalan political identity, a prior condemned the state repression against Catalonia. The priest was applauded by the congregation.

Thousands of People have filled the Plaça Sant Jaume, where both the Barcelona city Hall and the seat Catalan autonomist government are located, to protest in favor of democracy 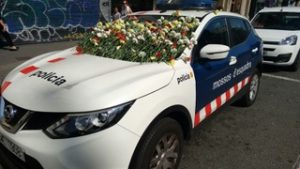 Carnations, the symbol of Portugal’s peaceful revolution of 1974 are being left on the windshields of parked patrol cars belong to the Mossos d’esquadra.

Earlier, the Casteller performance in the Paça Sant Jaume was accompanied by a “rain of ballots” as people tossed papers that had brought to simulate ballots in the air.

Jordi Sanchez once again reminds protesters to be peaceful so as to not fall into the trap of violence that the central government is setting for them.

Thomas S. Harrington is professor of Hispanic Studies at Trinity College in Hartford, Connecticut and the author of Public Intellectuals and Nation Building in the Iberian Peninsula, 1900–1925: The Alchemy of Identity (Bucknell University Press, 2014).