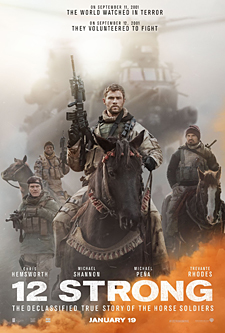 A new movie, “12 Strong,” is opening on January 19th. I’ve been seeing a lot of trailers for it while watching the NFL playoffs. It’s being advertised as America’s first victory in the “war on terror.” Based on a popular book, “Horse Soldiers,” it features American special operations troops charging into battle on horseback. The synopsis of the movie (at Fandango) describes it as follows:

“12 Strong” is set in the harrowing days following 9/11 when a U.S. Special Forces team, led by their new Captain, Mitch Nelson (Hemsworth), is chosen to be the first US troops sent into Afghanistan for an extremely dangerous mission. There, in the rugged mountains, they must convince Northern Alliance General Dostum (Negahban) to join forces with them to fight their common adversary: the Taliban and their Al Qaeda allies. In addition to overcoming mutual distrust and a vast cultural divide, the Americans – accustomed to state-of-the-art warfare – must adopt the rudimentary tactics of the Afghani (sic) horse soldiers. But despite their uneasy bond, the new allies face overwhelming odds: outnumbered and outgunned by a ruthless enemy that does not take prisoners.

I don’t think it will surprise anyone that, despite those “overwhelming odds” and being “outnumbered and outgunned by a ruthless enemy,” US troops prevail.

Watching the trailers on TV is a surreal experience. You get the impression the US cavalry sounded the charge and won the Afghan war in 2001. You’d never know US forces are still fighting in Afghanistan in 2018, facing a “stalemate” and a resurgent Taliban that controls vast swaths of territory, and that US forces face a “generational” slog to an endpoint where victory is indeed ill-defined. 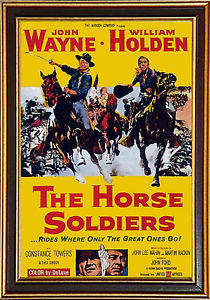 Even though America is treading water in the Afghan war, Hollywood has cherry-picked an episode from the early days of that war, in the tradition of a John Wayne movie (like “The Horse Soldiers“).

The Wild West has been reset to Afghanistan with US troops as the new sheriff in town, with the Taliban serving as the “savages” in the old Western tradition.

It’s the US cavalry to the rescue, in the wild Afghan mountains. Yet highlighting this one episode in America’s quagmire war in Afghanistan is more than misleading. It’s as if the Japanese made a film about World War II that began and ended with Pearl Harbor.

Remember when Candidate Trump boasted that, when he became president, Americans would win so much, we’d get bored with winning? “Believe me,” he said.

Maybe this is believable … at the movies.

5 thoughts on “Winning the Afghan War – In Hollywood”