The National Commission on Military, National, and Public Service (NCMNPS) released its interim report and schedule of formal hearings today.

The Commission was created in 2016 to study and report to Congress and the President on whether registration with the Selective Service System for military conscription (“the draft”) should be ended, extended to young women as well as young men, extended to older women and men with skills in special demand by the military (in health care, computer science, STEM, foreign languages, etc.), or replaced with something else such as compulsory “national service” with both civilian and military options. 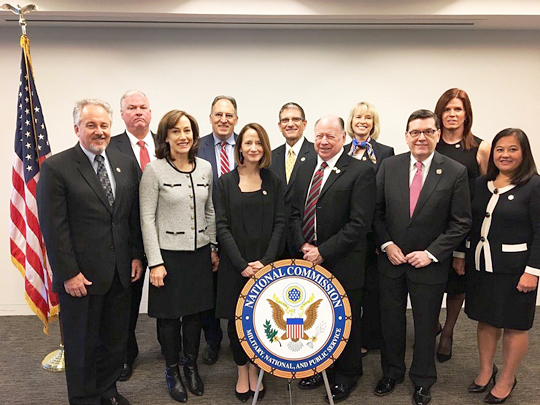 The Commission’s goal in its interim report released today is not really to “report” on what it has done, but to set the terms of debate (excluding options like, “Admit that draft registration has failed”), and test the political reaction to some of the proposals the Commission is considering.

For the most part, the report was as expected, including a complete absence of any mention of issues of compliance, enforcement, or feasibility of any compulsory service scheme.

But there were some additional noteworthy points:

* Two points of view, in particular, have been elided from the Commission’s selection and summary of public comments: antiwar feminism, and draft resistance as direct action. The Interim Report notes that the Commission heard from those “who believe that physical differences between men and women would make it impractical or even dangerous to conscript women to serve in combat roles” (i.e. anti-feminist opponents of drafting women, some of whom support drafting men), but doesn’t mention the longstanding strand of feminist opposition to war and conscription. And while the Interim Report notes that, “We have heard from both conscientious objectors who oppose war and feel the act of registration condones violence, and from draft resisters who refuse to register, believing conscription is a violation of their rights,” it treats these solely as political or moral objections. There is no acknowledgment that, as I and others have told the Commission, noncompliance poses a practical barrier to conscription. In falsely restating draft resisters’ position as, “They have argued that current law does not offer any acceptable options for Americans who choose not to register,” the Commission appears to be trying to delude itself into believing that if a civilian service “option” was available, we would no longer object to, or resist, a compulsory “national service” scheme. But in this, they are wrong.

* The Interim Report says that, “We are considering several possible ways in which universal service, whether mandatory or not, could be implemented for America’s young people…. [W]e are exploring what a program that requires every American to complete a dedicated period of military, national, or public service might look like.” But a mandate applicable only to young people would not be “universal”. The Interim Report betrays the typically profound and unexamined ageism that underlies the assumption that young people, and only young people, can be compelled to “serve” military or other interests defined by older people. The Commission never mentions the historic and continuing role of youth liberation as one of the sources of objection and resistance to age-based conscription.

The Commission will continue to accept written comments from the public and hold formal hearings during 2019, before announcing its final recommendations in March 2020.

At today’s press conference to announce the release of the Interim Report, Brigadier General Heck (U.S. Army Reserve), the Chair of the Commission, said that the formal hearings will primarily be for testimony by invited experts, but that, “We are also taking public comment as we go on our hearing tour. We will reserve a portion of that time to collect public comment in person at those hearings.” It’s not clear, though, how much time will be allowed for uninvited “open-mike” testimony.

The schedule of formal hearings and topics announced today is as follows. The law creating the Commission requires full notice of the time and place of each hearing to be posted on a Federal government Web site (most likely the Commission’s own site, Inspire2serve.gov) at least 14 days in advance: