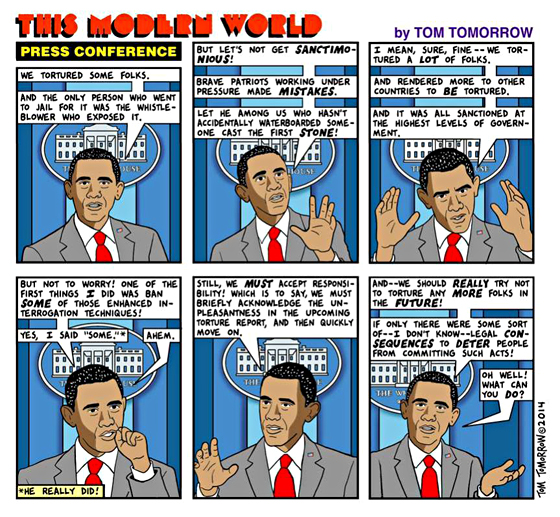 Five years ago, President Obama infamously said, “We tortured some folks.” And no one was held accountable; indeed, as Tom Tomorrow put it in a cartoon from that time, “The only government official who went to jail for it [John Kiriakou] was the whistleblower who exposed it.” In the cartoon, Tom Tomorrow has Obama say that, “Still, we must accept responsibility! Which is to say: we must briefly acknowledge the unpleasantness in the upcoming torture report, and then quickly move on.”

And that’s exactly what America did: quickly move on, without consequences (except for Kiriakou). And then candidates like Donald Trump emerged, boasting of how much he’d increase the use of torture. And thus Trump as president could pick Gina Haspel, implicated in the torture regime, as the new head of the CIA. Well done, President Obama.

Recently, one of my readers alerted me to concerted efforts to “unredact” the redacted CIA report released in December 2014, based on open source research and logical deduction by a number of British researchers, concerning extraordinary rendition and black sites. Check out this link for further details; the full report (403 pages) can be downloaded as a pdf file.

Here’s the first paragraph of the report, and an excerpt from the executive summary:

CIA Torture Unredacted presents the findings from a four-year joint investigation by The Rendition Project and The Bureau of Investigative Journalism into the use of rendition, secret detention and torture by the Central Intelligence Agency (CIA) and its partners in the "War on Terror". We have focused our efforts on understanding the evolution, scope and human impact of the CIA’s Rendition, Detention and Interrogation (RDI) programme, which operated between 2001 and 2009. During this time, the CIA established a global network of secret prisons (so-called "black sites") for the purposes of detaining and interrogating terrorism suspects – in secret, indefinitely, and under the most extreme conditions. As a result, scores of men were captured, at locations around the world, and disappeared into the programme for weeks, months or years on end, whereupon they were subjected to sustained torture and other forms of cruel, inhuman and degrading treatment.

This report, and The Rendition Project’s website, provide, without doubt, the most detailed public account to date of CIA torture.

We are publishing here:

CIA Torture Unredacted stands as a comprehensive public account of one of the most disturbing elements of the "War on Terror": a global programme of systematic disappearance and torture, carried out by the world’s most powerful liberal democratic states. In the face of continued obstruction and denial by the governments involved, which refuse to allow for a full accounting of the crimes which took place, we hope that this report will stand as a central reference point for all those who still seek redress and reparations for the victims of CIA torture, as well as some measure of the truth for us all.