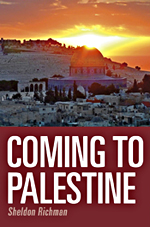 Check out this great interview of Sheldon Richman about his new book Coming to Palestine on the Tom Woods show.

In this incredible volume of essays, collected over 30 years, Sheldon Richman exposes the true history of Israeli dispossession of the Palestinians. Coming to Palestine turns the typical story most Americans have been told about Israel’s founding on its head. It is a ringing endorsement of reason, freedom, peace, and toleration in Palestine and Israel.