Ralph died on an escalator in a foreign airport on Christmas Eve. I called my black, carry-on suitcase "Ralph" because he was almost like family. Ralph was 30 years old in suitcase years. His zipper had broken, and I managed to fall onto his pull-up handle and break it.

Rather than leave him in an unmarked, third world landfill, I brought his remains back to Oakland. The other luggage in my closet and I held a quiet memorial around what remained of our Christmas tree. Almost all the soft sides were there. Even a few hard siders I hadn’t seen in decades showed up.

We recalled the good times and bad. Years ago I tied a pink ribbon around Ralph’s handle and he accused me of trying to make him look like a girl. I called him a sexist.

When the memorial was finished, I hoisted Ralph by his one good strap handle and put him in the recycle bin near some old Christmas tree lights. He would have wanted it that way. 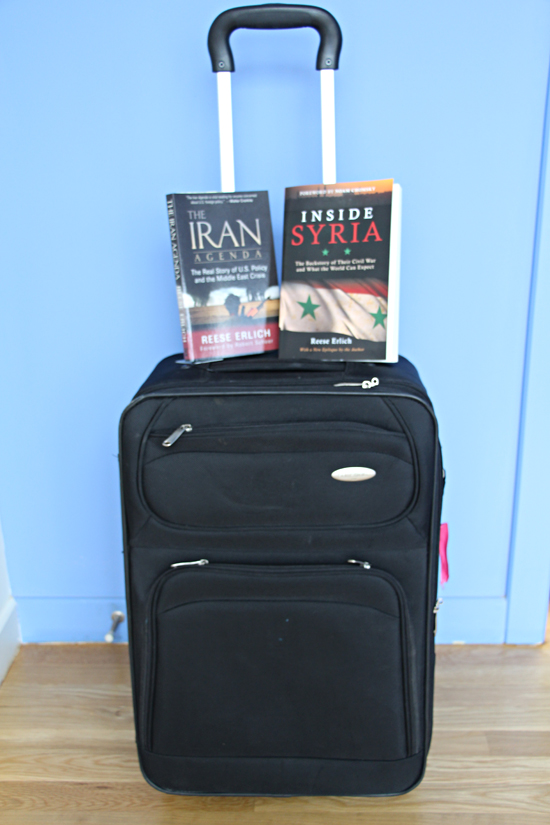 How it all began

The story goes back decades before modern suitcases were even invented. I was taking a train from East Berlin to Budapest in 1990. I had one of the those large, hard sided suitcases with the wheels attached on the narrow side. I pulled it with a long plastic handle, but it kept tipping over, amusing the East Germans, who had never seen wheels on any kind of suitcase.

I swore I would get a more balanced suitcase, one that fit in an airplane’s overhead compartment. As a freelance journalist I have traveled to 98 countries. I learned to keep all my baggage with me in case of last-minute plane changes, interaction with corrupt airport baggage handlers, or being tossed unceremoniously out of a country when officials ignored my visa.

So one day I wandered into a luggage store in Berkeley. That’s where I met Ralph. I was examining the merchandise when a voice said, "Psssst, over here. I’m tough, reliable and cost only 75 bucks." To this day I’m not sure what was more weird – a talking suitcase or a Samsonite rollboard for only $75.

Ralph was right. He had a nice compartment for dress clothes and expanded easily with a flip of the zipper. And he measured 25" externally, a size that is officially too big for overhead bins but in reality fits just fine.

Over the years I took Ralph everywhere – from Afghanistan to Zimbabwe. He got rained on in El Salvador and muddied in Syrian refugee camps. When a piece of him tore, I repaired it with duct tape. When the wheels went squeaky, squeaky, I sprayed on some WD-40. He came through it all.

He only got lost once when someone pulled him off the San Francisco airport carousel by mistake. Ralph protested but apparently the errant traveler didn’t speak luggage. That night an airline worker delivered Ralph to my house, embarrassed but OK.

I never told Ralph, but I did plan ahead for the day when he would roll no more. Ten years ago, while shopping in outlet stores in Secaucus, New Jersey, I bought another 25-inch carry on. But Ralph lasted much longer than anyone expected.

I kept the New Jersey suitcase, now named Secaucus Sally, in the closet sheltered from the harsh indignities of United Airlines overhead bins and luggage carousels. After Ralph’s memorial I brushed off the dust and got her ready for the next voyage.

Modest as ever, she had only one request. "If the overhead bins dare full, don’t let United Airlines drag me out like they did that poor doctor sitting in an overbooked seat." I promised. No suitcase ever deserves that.

Alas, Sally only lasted a year. Just a few days ago her wheels cracked, perhaps the result of carrying lots of my books to be sold at speaking events. Or perhaps this has become a Christmas time suitcase curse.

So now every Christmas as the fog descends on San Francisco and snow storms block airports around the country, my thoughts turn to Ralph and Sally. They are the last of a breed: 25 inches long and a suitcase you can talk to. They just don’t make ’em like that anymore.

Reese Erlich’s nationally distributed column, Foreign Correspondent, appears regularly in The Progressive. His book The Iran Agenda Today: The Real Story from Inside Iran and What’s Wrong with US Policy – is now available. Follow him onTwitter, @ReeseErlich; friend him onFacebook; and visit hiswebpage.