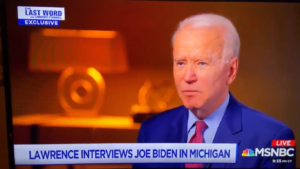 Biden made a series of false assertions on Iraq during an interview with MSNBC’s Lawrence O’Donnell on Monday night.

Biden claimed: “I didn’t believe he had those nuclear weapons, I didn’t believe he had those weapons of mass destruction” as MSNBC’s O’Donnell nodded approvingly. But in his floor speech for war in October 2002, Biden claimed Saddam Hussein “possesses chemical and biological weapons” and “is seeking nuclear weapons” and “for years he has prevented the UN inspectors from uncovering those weapons.”

STEPHEN ZUNES, zunes at usfca.edu, @SZunes
Professor of politics and coordinator of Middle Eastern Studies at the University of San Francisco, Zunes said today: “As chair of the Senate Foreign Relations Committee in 2002, Biden stated that Saddam Hussein had a sizable arsenal of chemical weapons as well as biological weapons, including anthrax, and that ‘he may have a strain’ of smallpox, despite UN inspectors reporting that Iraq no longer appeared to have any weaponized chemical or biological agents. And even though the International Atomic Energy Agency had reported as far back as 1997 that there was no evidence whatsoever that Iraq had any ongoing nuclear program, Biden insisted that Saddam was ‘seeking nuclear weapons.’

“After refusing to allow former chief weapons inspector Scott Ritter to testify before his committee that Iraq had achieved at least qualitative disarmament, Biden defended his false claims about Iraqi weapons of mass destruction on ‘Meet the Press‘ in 2007, by insisting that ‘everyone in the world thought he had them. The weapons inspectors said he had them.’”

SAM HUSSEINI, cell: samhusseini at gmail.com, @samhusseini
Senior analyst with the Institute for Public Accuracy, Husseini said today: “Biden has been lying about Iraq for years, at times brazenly. When the Iraqis honestly were saying in 2002 that didn’t have WMDs, Biden said Saddam Hussein was lying. When he was asked about his record in 2007, Biden replied: ‘The real mystery is, if he [Hussein], if he didn’t have any of them left, why didn’t he say so?’ And Tim Russert let him get away with that then. Instead of scrutinizing claims, major media have continuously both pushed lies about the Iraq war and enabled politicians who did so. And the lies never really stopped. Unlike Trump who just repeats the same brain dead lie over and over, many of the Iraq war lies morphed and became more sophisticated.

“On Monday, Biden claimed that he voted for the war authorization ‘to try to prevent a war from happening’ to get the UN Security Council to approve inspectors. But the congressional vote happened on October 11 — well after Iraq had agreed to the UN’s demand that the inspectors be allowed back in. (See Sept. 16, 2002 New York Times report: “UN Inspectors Can Return Unconditionally, Iraq Says.” This was immediately after a delegation organized by the Institute for Public Accuracy had gone to Iraq.)

“And Biden posing last night as though he was a statesman by asking for a second UN resolution on Iraq before the invasion (as with this falsehood-laden Washington Post op-ed published exactly 17 years ago today) is completely disingenuous. In early March, British intelligence analyst Katharine Gun had exposed that the US and Britain were illegally spying on the UN in order to coerce other members to vote for war. This was widely ignored in the US media, but caused many UN Security Council members to resist a second forced resolution. So Biden asking for a second resolution but still backing invasion, as he did, is completely dishonest.” (See piece for FAIR on the Katharine Gun case: “Film ‘Official Secrets’ Is Tip of Mammoth Iceberg.”)

“As for Biden’s claim that Hussein ‘for years [Hussein] has prevented the UN inspectors from uncovering those weapons,’ the fact is that the 90s inspection regime, UNSCOM, ended in 1998 not because of Iraqi action as was constantly claimed by the establishment, but because Bill Clinton withdrew the inspectors to launch the Desert Fox bombing campaign just before his scheduled impeachment vote. Withdrawing the later inspections regime, UNMOVIC, was also be how Bush launched the 2003 invasion.”

Husseini’s recent pieces include “It Is Remarkable — and Dangerous — How Little Scrutiny Biden Has Received for Supporting Iraq War.” See related accuracy.org news release, including “Kerry Covers up Iraq War Falsifications” about when he appeared on Chris Hayes’ show.

Zunes is among several prominent analysts featured in a just-released mini-doc narrated by Danny Glover, WORTH THE PRICE? Joe Biden and the Launch of the Iraq Warand produced by Mark Weisbrot.

Reprinted from the Institute for Public Accuracy.