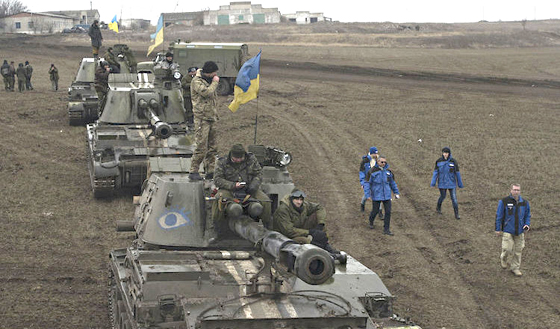 The conversation between the American and Ukrainian presidents takes place at a particularly difficult time, coinciding with a new escalation of violence in the Donbass region. In fact, Ukraine has never strictly complied with the terms of the Minsk agreements, which imposed a ceasefire on the war, but it has consistently acted in a aggressive and destructive way, with attacks, illegal arrests and murders. Still, after the rise of Biden – knowing the more interventionist position of the new American president – Kiev began to invest even more in military pressure in regions bordering Russia, not only in the Donbass, but also in the Crimea region and other areas close to Russia. Kiev gradually shows interest in making its entire border with Russia a NATO occupation zone.

In February, Ukrainian Minister of Infrastructure Vladislav Krikliy asked the Western military alliance to monitor airspace across the border with Russia. In early April, Russian government spokesman Dmitry Peskov denounced the exponential increase of US military personnel on the Russian-Ukrainian border, warning of the dangers of NATO actions in the region, which was responded by Lloyd Austin, Pentagon’s leader, with a declaration of American support for Kiev in the face of “Russian aggressions” – jargon extremely repeated by Americans and Ukrainians, but completely unfounded. On the occasion, Peskov warned that Moscow will take all necessary measures to defend Russian borders, which was seen later with a large move of Russian troops to the conflict zones in Donbass and Crimea. According to American intelligence data, about 4,000 Russian soldiers have been deployed in these regions, which has generated negative reactions on the part of NATO. Moscow declared that these military actions are normal and should not be a cause for concern.

It is curious to note how Ukraine has promoted an increase in violence but is unable to deal with the consequences of its own actions. This Saturday, a Ukrainian soldier was killed, and others were injured in the explosion of a landmine in Donbass. Kiev uses cases like this to endorse the rhetoric of Russian aggression and call for support for NATO, but in fact, Russia is not yet directly involved in Donbass, only providing logistical support to popular militias in the region. The recent troop movement had no effective military results – they have only put Russian soldiers on standby in the face of threats.

Indeed, Kiev does not have the capacity to deal with the conflict, not even facing only popular militias, but in its anti-Russian ideological extremism, the government prefers to risk the lives of its own soldiers by investing in an escalation of violence in order to justify a NATO intervention on the basis of an alleged “Russian aggression” – when the aggressor is precisely Kiev. It is important to emphasize the Ukrainian government’s belief that, in fact, NATO will intervene in favor of Kiev’s forces, as local disputes in eastern Ukraine were so important that Washington risked a direct confrontation with Russian interests in the region. This is something that seems unrealistic even for an ideologically committed president like Joe Biden – he certainly can intervene in the region in some way to help Ukraine, but it will not happen in the way Kiev apparently hopes.

The entire Russian border region is fraught with tensions and conflicts and this will not stop anytime soon. The correct path to be followed is the collective abdication of violence and resolution through diplomatic means.