Congress has passed a sprawling $1.5 trillion spending bill that will fund the government through the end of the fiscal year, proposing a significant boost for the military budget and a $14 billion aid package for Ukraine, among other things.

As Americans are increasingly concerned with inflation and skyrocketing gas prices, Congress is set to hand the Pentagon even more tax dollars, calling to boost the ‘defense’ budget to over $782 billion – a six-percent increase over last year. Washington currently outspends the next 11 largest militaries combined, nine of which are close US allies. 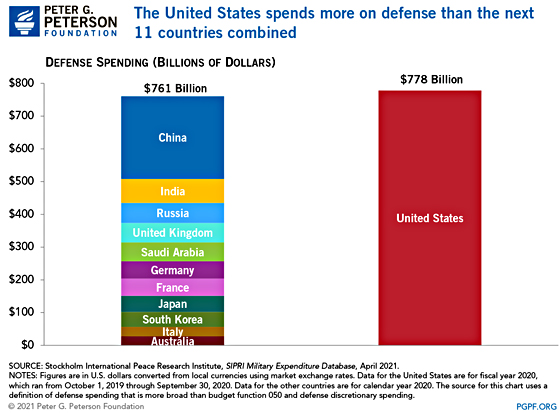 The US air fleet is set to receive several additional aircraft under the bill, including a dozen F-18 Super Hornets, five Reaper drones, CH-53K King Stallion heavy-lift helicopters and parts for the problematic F-35 fighter.

The legislation will also seek to boost the production capacity for nuclear submarines by pumping hundreds of millions into the industry. Funding for a slate of new warships has also been proposed, including an Arleigh-Burke class destroyer, three littoral combat ships, two expeditionary fast transport ships and $775 million for an additional John Lewis-class fleet oiler.

Included in the 2,700-page bill is a $14 billion measure dubbed a ‘Ukraine aid package,’ though $3 billion will go directly to US forces to cover costs of repositioning troops to NATO’s “eastern flank.” At least $7.5 billion will actually go to Kiev’s military, however, with another $3.5 billion devoted to weapons and $4 billion for humanitarian efforts amid a Russian invasion launched in late February.

Emboldened by the bloodshed in Ukraine, lawmakers have more than doubled the price tag on the aid package for Kiev since the White House initially asked Congress for $6 billion last week.

House Democrats were forced to abandon a $15.6 billion Covid-19 measure intended to boost US vaccine supplies, test kits and treatment, as Republicans insisted on reducing federal aid to the states to cover the cost of the new pandemic package. House Speaker Nancy Pelosi called the decision “heartbreaking,” but added that it was necessary to pass the bill as it includes “emergency funding for Ukraine and urgent funding to meet the needs of America’s families.”

The gargantuan spending bill was approved by two separate votes, separating out the military programs from the rest of the spending proposals. Lawmakers backed the former package overwhelmingly in a 361-69 vote, while the other passed 260-171 over Republican opposition. It will now head to the Senate and, if passed there, is likely to be signed into law by President Joe Biden.