“Ingsoc. The sacred principles of ingsoc. Newspeak, double-speak, the mutability of the past.”
~ George Orwell, 1984

As today dawned, I was looking out the window into the cold grayness with small patches of snow littering the frozen ground. As light snow began to fall, I felt a deep mourning in my soul as a memory came to me of another snowy day in 1972 when I awoke to news of Richard Nixon’s savage Christmas bombing of North Vietnam with more than a hundred B-52 bombers, in wave after wave, dropping death and destruction on Hanoi and other parts of North Vietnam. I thought of the war the United States is now waging against Russia via Ukraine and how, as during the U.S. war against Vietnam, few Americans seem to care until it becomes too late. It depressed me.

END_OF_DOCUMENT_TOKEN_TO_BE_REPLACED

Experienced foreign policy analysts such as Ray McGovern, Scott Ritter, and Pepe Escobar, while agreeing that the Biden administration is clearly guilty of provoking Russia over Ukraine, are divided over whether it will lead to war. All agree that Russia has no intention of invading Ukraine and that it is clearly justified in demanding safe borders by insisting U.S./NATO withdraw troops and missiles from the countries surrounding it, stop NATO’s "open door" policy, stop putting nuclear weapons in Europe, etc.

Clearly such demands are consonant with the US’s own historical demands for safe borders, evidenced most clearly in the Cuban Missile Crisis of October 1962 when the world nearly suffered a nuclear war over Soviet missiles in Cuba. And equally obvious is the fact that the American posture today is hypocritical in the extreme and can only be accepted by propagandists and those ignorant of history. The Biden administration must assume that most people are ignoramuses and that its obvious belligerence and blatant propaganda will pass as some sort of defense of freedom, even when the US engineered a Ukrainian coup d’état in 2014 in support of Neo-Nazis when Biden was President Obama’s vice-president. But that was nearly eight years ago, which is an eternity in a country of amnesiacs.

END_OF_DOCUMENT_TOKEN_TO_BE_REPLACED

Since the annual U.S. Veterans Day holiday honoring military veterans was just observed on November 11, it seems more than appropriate to suggest the creation of a US Victims Day, just as in a similar effort at truth in labeling, the Defense Department should be renamed the Offensive War Department.

For the victims of American terrorism far outnumber the American soldiers who have died in its wars, although I consider most US veterans to be victims also, having been propagandized from birth to buy the glory of war, not the truth that it’s a racket that serves the interests of the ruling class.

Such wars, carried out with bombs, drones, mercenaries, and troops, or by economic embargoes and sanctions, are by their nature acts of terrorism. This is so whether we are talking about the mass fire bombings of Japanese and German cities during WW II, the nuclear bombings of Hiroshima and Nagasaki, the carpet bombings and the agent orange dropped on Vietnam, the depleted uranium on Iraq, the use of terrorist surrogates everywhere, the economic sanctions on Cuba, Iran, Syria, etc. The list is endless and ongoing. All actions aimed at causing massive death and damage to civilians.

END_OF_DOCUMENT_TOKEN_TO_BE_REPLACED

Like the wandering and rascally Odysseus upon whom he models his life, Oliver Stone is "double-minded" in the most profound and illuminating ways. The title of his fantastic new memoir is a case in point. "One of the first basic lessons in filming," he writes, "is chasing the light. Without it, you have nothing – no exposure that can be seen; even what you see with your naked eye needs to be shaped and enhanced by the light." 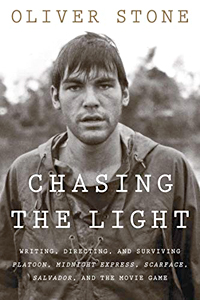 For as a true artist living out a marriage between his writing and his filmmaking, his father and his mother, the warrior and the peacemaker, the domesticated and wild man, he has chosen a title that has a double meaning that is subtly woven like a thread through this labyrinthine tale. It takes the reader from his childhood through his service in Vietnam and his struggles as a writer and filmmaker up to 1987 and his great success with his powerful autobiographical film, Platoon, for which he received Oscars for Best Film and Best Director, among others.

Driven by a youthful urge to escape his internal demons first brought on by his mismatched parents’ divorce when he was fifteen, Stone dropped out of Yale, his father’s alma mater, where he had enrolled to fulfill his stockbroker father’s dream. He accepted an offer from a Catholic Church group to teach English-speaking high school students in Chalon, a suburb of Saigon, which he did for six months before traveling around southeast Asia. Back in Saigon, he joined the merchant marine and worked his way back to the states cleaning boilers, the lowest and dirtiest job on the ship. After a storm-tossed 37 days journey, he was cured of his desire to go to sea, a romantic fascination he had acquired from literature. The lesson: Books are not life, nor are movies – they are ways to shape and illuminate it.

END_OF_DOCUMENT_TOKEN_TO_BE_REPLACED

As I sit on the small balcony on the top floor of an old house in the working class neighborhood of Alfama in Lisbon, Portugal, it is early evening, the time for wine and voices wafting on the fragrant breeze through the twisting cobble-stoned streets. The National Pantheon (Panteao Nacional) stares me in the face. I stare back, and then look up to the heavens and to the cross that is silhouetted against the blue sky. It crowns the Pantheon’s massive dome. On its façade stand three statues, only one of which I can see clearly. She is Santa Engracia, a Christian martyr from before the period when the Roman Emperor Constantine legalized and legitimatized Christianity, transforming the cross into a sword. It was her church before the state found it acceptable to convert it into a space to glorify its secular saints and its military and political prowess.

Rome never dies, although it falls in different guises but is resurrected by the human urge to dominate others. The savage complicity between church and state perdures through the ages.