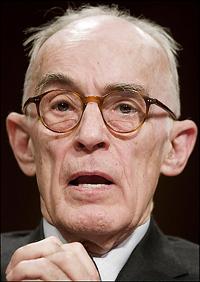 The sad news just reached us that retired General William E. Odom has died of an apparent heart attack. He was 75.

Odom served as director of the National Security Agency during Ronald Reagan’s second term. He had a reputation as a military hard-liner who opposed any compromise with the Soviet Union. Earlier in his career, as an Army officer in Vietnam, Gen. Odom had privately come to oppose U.S. involvement in foreign wars that brought, in his view, little benefit to the United States. He drew parallels between Vietnam and Iraq and believed that the only sensible path for the United States was a complete and immediate withdrawal from Iraq.

When the Bush Administration prepared for the 2003 invasion of Iraq, Gen. Odom warned that military action in Iraq would be foolhardy and futile.

Odom was later known for his view that the US could withdraw from Iraq quickly and safely. He became a fixture on news programs and never altered his critical stance toward the Bush administration’s policies in Iraq and Iran.

Gen. Odom’s prudent and thoughtful variety of foreign policy conservatism will be missed.

Here are some other great articles by Odom: